It feels like we've barely been able to catch our breath from Apple news since September, and this week was no exception with Apple announcing yet another virtual event for next Tuesday, November 10, and launching pre-orders for the iPhone 12 mini, iPhone 12 Pro Max, and HomePod mini. 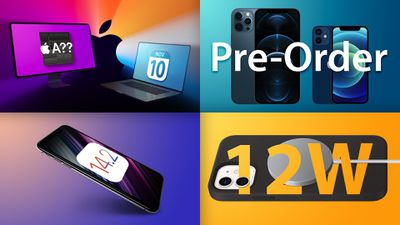 In addition, this week saw the launch of iOS 14.2 with some new emoji, an Intercom feature, and additional updates, fixes, and tweaks, while we also learned more about some of Apple's MagSafe accessories. Throw in the usual bevy of rumors about future products, and it was quite a busy week.

Read on below for all of the details from this week!

Apple has announced that it will be hosting its third event in as many months on Tuesday, November 10 at 10 a.m. Pacific Time, teasing that it has "one more thing" to unveil. Apple will once again be streaming the event online, on both its website and YouTube.

The event is widely expected to mark the arrival of the first Apple Silicon Mac — or perhaps Macs plural. In June, Apple announced that it would be transitioning from Intel processors to its own custom Apple Silicon processors in Macs, promising industry-leading performance per watt. At the time, Apple said that it planned to ship its first Mac with Apple Silicon by the end of 2020, so a release should be rather soon.

Bloomberg this week reported that the first Apple Silicon Macs will likely be new models of the 13-inch MacBook Pro and MacBook Air. The report claimed that a new 16-inch MacBook Pro with Apple Silicon is also in development, but it is unclear if that model will debut next week. Farther down the line, Apple is also said to be working on a smaller version of the Mac Pro, but it sounds like it won't be announced until at least 2021.

For full details on everything we expect to see and could see at Tuesday's event, check out our event guide.

Apple is now accepting pre-orders for the iPhone 12 mini and the iPhone 12 Pro Max through its online storefront and the Apple Store app, as well as through carrier partners.

Alongside the start of pre-orders for the iPhone 12 mini and iPhone 12 Pro Max, Apple also added product listings for the upcoming Leather Sleeves for the various iPhone 12 sizes and the MagSafe Duo Charger, which offers pairs a MagSafe charger for your iPhone with an Apple Watch charging station. Both products are priced at $129, and Apple says they are "coming soon," but has not announced specific launch dates.

iOS 14.2 and iPadOS 14.2 Released With New Emoji and Wallpapers, Intercom, and More

In addition to new emoji and wallpapers, iOS 14.2 and iPadOS 14.2 include support for Apple's new Intercom feature, which turns the HomePod, HomePod mini, and select other devices into intercoms that can be used throughout the home for convenient communication.

Intercom allows family members to communicate with one another in the home by sending and receiving spoken messages through HomePod speakers or through iPhone, iPad, Apple Watch, AirPods, and CarPlay. Intercom can be activated by saying "Hey Siri, Intercom" to activate it, followed by a message, and it can even be used when people are away from home.

In a recently updated support document, Apple has indicated that its new MagSafe Charger will be limited to 12W peak power delivery when used with the upcoming iPhone 12 mini, compared to up to 15W for all other iPhone 12 models.

Apple says the iPhone 12 mini can achieve this 12W with a USB-C Power Delivery power adapter that is at or above 9V/2.03A. However, the support document notes that power delivered to any iPhone 12 model at any moment will vary depending on various factors, including temperature and system activity.

The support document also notes that when Lightning accessories such as EarPods are connected to any iPhone 12 model, the MagSafe Charger is limited to 7.5W charging to comply with regulatory standards.

MagSafe is a new feature on all iPhone 12 models that allows for magnetic accessories to be attached to the back of the devices, including Apple's MagSafe Charger for more precise wireless charging.

Apple has also released a Leather Wallet with MagSafe for iPhone 12 models. The accessory became available for purchase at select Apple Stores this week, so we picked one up to see if it's a worthwhile alternative to a traditional wallet.

A supply chain report out of Korea this week claimed that LG will supply Apple with Mini-LED displays for new iPad models set to launch in the first quarter of 2021. According to the report, LG will begin mass production of the displays at the end of this year.

Rumors of a Mini-LED iPad Pro have been plentiful. Back in June, cryptic-but-reliable leaker L0vetodream said that Apple planned to launch new iPad Pro models with an A14X chip, 5G, and a Mini-LED display in the first half of 2021. Multiple sources have claimed this iPad Pro will be a 12.9-inch model, including analyst Ming-Chi Kuo.

Mini-LED displays provide many of the same benefits as OLED displays, including higher brightness, improved contrast ratio, and increased power efficiency. The technology is expected to expand to Macs starting next year.

I7guy
Apple is on an amazing roll, especially given the situation with this pandemic.
Score: 4 Votes (Like | Disagree)

iapplelove
So far for me, ios 14 has been extremely buggy. More so than 13.
Score: 2 Votes (Like | Disagree)

Great time to be an apple fan

Not as exciting as it is to be a shareholder, no charger in box to save the planet, but a shiny new magsafe one using rare earth metals dug out from the sea ! A camera that cant be repaired on the new iPhone 12 to help boost those shareholders dividends, great to see Tim putting the shareholders at the centre of everything Apple does !
Score: 1 Votes (Like | Disagree)

JosephAW
Anyone else getting a horizontal scrollbar in the middle of the Safari window when you zoom in iOS 14.2? :rolleyes:

George Dawes
Tim’s doing a great job. I’m sure Steve is looking down on him , proud he made the right choice
Score: 1 Votes (Like | Disagree)
Read All Comments

Friday April 16, 2021 10:58 am PDT by Mitchel Broussard
A new sale has hit Apple's MagSafe Duo Charger today on Amazon, now available for $112.45, down from $129.00. The MagSafe Duo includes a Lightning to USB-C cable, but not Apple's 20W USB-C Power Adapter. Note: MacRumors is an affiliate partner with Amazon. When you click a link and make a purchase, we may receive a small payment, which helps us keep the site running. We have seen the...
Read Full Article • 46 comments

Will There Still Be an iPhone 13 Mini?

Thursday February 25, 2021 8:34 am PST by Hartley Charlton
Amid repeated signs of low iPhone 12 mini sales and cuts to production orders, whether or not Apple will release an iPhone 13 mini model later this year has come into question. The iPhone 12 mini does not appear to be selling as well as Apple had hoped, making up just six percent of iPhone 12 sales in the U.S. in October and November 2020, according to data gathered by Consumer...
Read Full Article

Saturday March 13, 2021 6:00 am PST by MacRumors Staff
Rumors about a potential Apple event are starting to heat up as we're getting close to the time of year when Apple frequently hosts an event, so stay tuned for more information on that front in the coming days and weeks. This week also saw Apple confirm it has discontinued both the iMac Pro and the original HomePod, while rumors are continuing to look forward to new Apple silicon MacBook Pro ...
Read Full Article • 44 comments

Saturday October 17, 2020 6:00 am PDT by MacRumors Staff
It came about a month later than in most years, but this week finally saw Apple's media event where it showed off its new iPhone lineup. As expected, we got four new devices in the iPhone 12 and iPhone 12 Pro lineups with staggered release dates, and Apple also showed off the upcoming HomePod, a much smaller and cheaper smart speaker compared to the standard HomePod. Apple's media event...
Read Full Article • 18 comments

Saturday October 10, 2020 6:00 am PDT by MacRumors Staff
Apple's iPhone 12 event is nearly upon us, and leaks and rumors have been flying around in the final days. We've got new details on the iPhone 12 and its launch timing, a smaller HomePod, and more. In addition, we're still looking at a number of other new products including AirPods Studio, AirTags, and the first Apple Silicon Macs, so read on below for the latest on all of these! Apple...
Read Full Article • 80 comments