Apple plans to launch new iPad Pro models with an A14X chip, 5G connectivity, and a Mini-LED display in the first or second quarter of 2021, according to the increasingly reliable Twitter account L0vetodream. 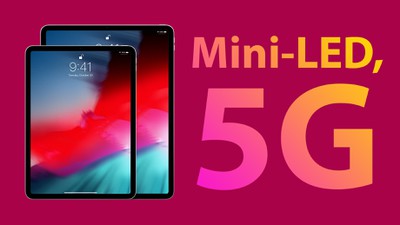 The leaker claims that the new iPad Pro models will be equipped with Qualcomm's Snapdragon X55 modem, which supports both mmWave and sub-6GHz. mmWave is a set of 5G frequencies that promise ultra-fast speeds at short distances, ideal for dense urban areas. By comparison, sub-6GHz 5G is generally slower than mmWave, but the signals travel further, better serving suburban and rural areas.

iPhone 12 models are also expected to use the X55 modem, but beyond that, Apple is reportedly developing its own 5G baseband technology for future devices. Apple acquired Intel's smartphone modem business last year to bolster that effort.

While multiple sources initially pointed towards a late 2020 refresh of the iPad Pro, including Ming-Chi Kuo and Jon Prosser, there have now been several reports indicating that the new A14X/5G/Mini-LED models are likely to debut in 2021. This would make sense given that Apple just refreshed the iPad Pro in March, and even though that was a relatively minor update, another refresh later this year would seem rather quick.

New features on the latest iPad Pro models include an A12Z Bionic chip that is very similar to the A12X chip, an Ultra Wide camera that enables 0.5x zoom, a LiDAR Scanner for enhanced augmented reality, and better sounding microphones.

Relentless Power
Which basically debunks OLED Ever being a consideration for the iPad with mini LED being the next step forward. (Which is totally fine.) The 5G aspect doesn’t interest me, the performance and display improvements however does.
Score: 11 Votes (Like | Disagree)

Which basically debunks OLED Ever being a consideration for the iPad with mini LED being the next step forward. (Which is totally fine.) The 5G aspect doesn’t interest me, the performance and display improvements however does.

Glad they didn't go OLED - the way I use my iPad would have made for some crazy burn-in. My screen time each day is 8-9 hours since I use it as a secondary display for my Mac, and other times just leave email/slack open on it with the display set to auto-off after 10 minutes.

I really don't see why anyone would want OLED on a tablet or laptop, sure the colors are great and the black levels are perfect, but for anything other than movies/tv, why does that matter?
Score: 8 Votes (Like | Disagree)

They can’t even launch MiniLED for the tiny Apple Watch yet somehow they are already gonna include it in the iPad and maybe the MacBook?

I am still doubting it. Just look how long it took Apple to release an OLED iPhone which did not even make it on its whole line up yet

Micro LED isn't anywhere near ready for prime time. Mini LED exists today - it's a form of full-array local dimming, and uses smaller LED lights behind the screen to form lighting zones -- hundreds up to around a thousand for bigger TVs, an Apple Watch is so small there'd be like 4 zones. Micro LED is an LED behind every single LCD pixel and what is expected to replace OLED...
Score: 7 Votes (Like | Disagree)

This would be a big refresh. I'd probably jump in and retire my 5th gen iPad.

I'm really wondering what Apple will do when they manage to integrate the modem into their processors, will they dump the 2 versions (wifi vs. cellular) and make all iPads cellular enabled? Or will they have a software block to disable the modem on some models?

I would not be surprised if they disable it with software. I still don’t think it is worth paying extra $150 for the celular connectivity in the current line up.

Exactly! I could not care less for 5G, all I want is for the bezels to shrink, better CPU/GPU/RAM, and larger base storage options. I would like for them to bring back the headphone jack as well.
Score: 5 Votes (Like | Disagree)
Read All Comments

Tuesday May 11, 2021 5:06 am PDT by Hartley Charlton
Apple's next MacBook Air will feature a completely new design and come in a range of colors like the 24-inch iMac, according to leaker Jon Prosser, who has now released supposedly accurate renders of the new machines based on leaked images. In a new video uploaded to YouTube channel Front Page Tech, Prosser elaborated on his previous prediction that Apple's next-generation MacBook Air models ...
Read Full Article • 49 comments

Tuesday May 11, 2021 11:56 am PDT by Joe Rossignol
Last month, Apple introduced a new iPad Pro with the same M1 chip found in the latest Macs, and early benchmark results indicate that the M1 iPad Pro is over 50% faster than the previous-generation iPad Pro. Based on five legitimate Geekbench 5 results (here's the fifth) for the fifth-generation 12.9-inch iPad Pro with the M1 chip, the device has average single-core and multi-core scores of...
Read Full Article • 160 comments