Top Stories: What to Expect at WWDC, Back to School Promotion, 16" MacBook Pro Gets Faster Graphics Option

This week was mostly about Apple gearing up for WWDC, but aside from the expected preparations like updating its apps and websites to stream the keynote and other sessions and beefing up other areas to support the first all-digital WWDC, Apple also cleared the decks a bit with a few launches including a new high-end graphics option for the 16-inch MacBook Pro, SSD kits for the Mac Pro, and the annual Back to School promotion.

Subscribe to the MacRumors YouTube channel for more videos.
Another big story this week was Apple's rejection of apps for the new "Hey" email service, due to the developers refusing to include a payment option using Apple's in-app purchase mechanism. The situation is leading to a more comprehensive discussion about what the rules for playing in the App Store should be more than a decade after the marketplace's debut.

Check out our video above and read on below for more on this week's biggest stories and to make sure you're ready to go for WWDC on Monday!

In a world that could use a little excitement, WWDC 2020 is finally almost here. While the event will be held virtually this year, it will still be jam-packed with announcements, with everything from iOS 14 to a potential redesigned iMac. For a look at everything we expect or hope to see at Monday's keynote, check out our overview guide! 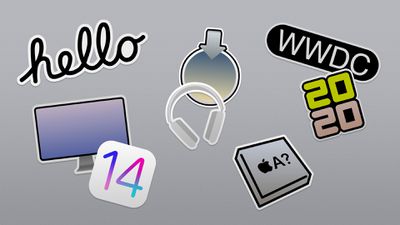 Ahead of WWDC, Apple got the ball rolling this week by updating its Developer app and extending it to the Mac, announcing its Swift Student Challenge winners, launching its redesigned Developer Forums, and more.

Apple will live stream Monday's WWDC keynote at 10:00 a.m. Pacific Time through its website, the Apple Developer apps, the TV app on the Apple TV and other platforms, and on YouTube, but for those unable to watch, we'll be covering the event on MacRumors.com and through our MacRumorsLive Twitter account.

As a pre-WWDC treat, Apple has released a new high-end graphics option for the 16-inch MacBook Pro. For an extra $700, the notebook can now be configured with AMD Radeon Pro 5600M graphics with 8GB of HBM2 memory.

This program allows customers to purchase new Apple products and pay for them in 6-24 monthly installments without any interest charges.

Apple has launched its annual "Back to School" promotion in the United States and Canada, several weeks earlier than usual. This year, Apple is offering free second-generation AirPods with the purchase of an eligible new Mac or iPad.

During the checkout process, it is also possible to upgrade to second-generation AirPods with a wireless charging case for an additional $40 or to AirPods Pro for $90.

The App Store developer rules are back in the spotlight just ahead of WWDC, as controversy has erupted surrounding Apple's rejection of the new "Hey" email service that refuses to implement subscriptions via Apple's in-app purchase.

Apple is digging in its heels in noting that email apps like Hey don't qualify for an exemption of the in-app purchase requirement, which is limited to "reader" apps for content services like Netflix and Spotify. The controversy is leading to a broader discussion about Apple's App Store rules, the fees it charges, and more.

Alleged molds and CAD images for Apple's rumored iPhone 12 models suggest that the devices will have flat edges like recent iPad Pro models, as widely rumored. The return of this design would coincide with the 10th anniversary of the iPhone 4, which also featured a flat stainless steel frame.

HenrikWivel
Already preparing myself for a ‘magical’ event that will get me completely underwhelmed ?
Score: 12 Votes (Like | Disagree)

Already preparing myself for a ‘magical’ event that will get me completely underwhelmed ?

If it’s coming next week, I think an ARM based Mac roadmap is gonna be plenty exciting. Even if you’re against the idea, it’s still a giant change.
Score: 4 Votes (Like | Disagree)

For Apple to really put Metal to use in the living room. The Nintendo Switch is a low-performance device and is immensely popular. I think a lot of people realize content is king — The majority don’t buy for just high-end specs alone. Apple is best positioned to throw all their gaming chips in on console competition with an Apple TV vs the Mac, iPhone, or iPad because it has a constant power source and no portability aspect. It’s an opportunity for them to expand Apple Arcade adoption as well. Where they would normally use power conserving techniques in a chip, they can push more to the limits on Apple TV because battery life is of no concern.

Release something like this a year before your AR/VR product and you have two stellar years in a row where you’re just killin’ it on the vertical integration front. I’m not convinced the reverse would work out as well. We’ll see what happens!

I don’t think the problem with ATV and gaming is a hardware problem. Maybe I’m wrong. But it seems to me if they sold the damned things with bundled controllers and then let devs write games that could only be played with controllers (and didn’t mandate that games had to be playable with the remote), it would go a long way.
Score: 4 Votes (Like | Disagree)

AussieStu
I just want a MacBook Pro with Magsafe again. Some actual ports I can use, updated hardware and ram and SSD i can upgrade. Since Jonny left they seem to be slightly going back to how they used to be. How many times i have tripped over cables and pulled peoples MBPs off tables because of this stupid USB C ****.
Score: 3 Votes (Like | Disagree)

What is it people are hoping for in the new ATV?
Score: 2 Votes (Like | Disagree)

If they still sold the rMBP15, I'd happily buy a brand new one!
Score: 2 Votes (Like | Disagree)
Read All Comments