A new email app called "Hey" from the team at Basecamp has run into trouble with Apple for refusing to offer a subscription option that can be purchased in the iOS app. 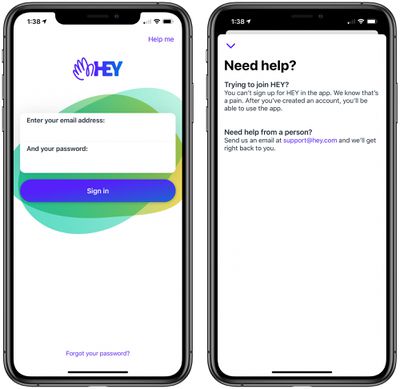 Hey, which launched on Monday, is priced at $99 per year. Subscriptions for the service must be purchased on the Hey website and are not offered in the iOS app because Hey's developers don't want to pay Apple a 15 to 30 percent cut of their fees.

Apple, however, has told the Hey team that customers need to be able to purchase the service in the iOS app and that if in-app purchases are not implemented, the Hey app could be removed from the App Store. Apple has a long running rule that apps can't link to outside purchase options and must use the in-app purchasing tools when offering paid content or subscriptions, but many apps skirt that rule by avoiding in-app purchases and not providing links to outside websites.

Netflix and Spotify, for example, do not allow customers to sign up for or subscribe to their services on the iPhone or the iPad, and do not link to their respective websites. Each app instead offers a message about sign ups being unavailable in the app.

The Hey email app does the same thing, and as Basecamp CTO David Heinemeier Hansson explains in an interview with Protocol, the team thought that it would be exempt from Apple's rules because it's following in the footsteps of apps like Netflix.

Updates for Hey have been stalled until the developers comply with Apple's request to add in-app purchase options, and despite appeals and escalation requests, Apple has held firm on the requirement. Apple says that Hey does not qualify as a "reader" app, which means new users need to be able to sign up within the app using in-app purchases.

Apple didn't respond to a request for comment. But on Tuesday afternoon, it sent Basecamp a slightly softer written notice. "We noticed that your app allows customers to access content, subscriptions, or features they have purchased elsewhere, but those items were not available as in-app purchases within the app," it said. Because Hey didn't qualify as a "Reader" app, Apple said that existing subscribers could log in as normal but Hey needed to make all subscriptions available to new users as in-app purchases.

It's not entirely clear why Apple is requiring Hey to provide an in-app subscription option when it allows Netflix and Spotify to decline to offer in-app purchase options while still having their apps in the ‌App Store‌.

Hey's developers do not intend to comply with Apple's request for in-app purchase options. "There is never in a million years a way that I am paying Apple a third of our revenues," Heinemeier Hansson told Protocol. That is obscene, and it's criminal, and I will spend every dollar that we have or ever make to burn this down until we get to somewhere better."

Update: Apple provided a statement to Protocol and said that it made a mistake approving the Hey app in the first place when it didn't conform to Apple's guidelines. Apple said that sign-in only apps are allowed for business services, but not consumer products.

Apple told me that its actual mistake was approving the app in the first place, when it didn't conform to its guidelines. Apple allows these kinds of client apps -- where you can't sign up, only sign in -- for business services but not consumer products. That's why Basecamp, which companies typically pay for, is allowed on the App Store when Hey, which users pay for, isn't. Anyone who purchased Hey from elsewhere could access it on iOS as usual, the company said, but the app must have a way for users to sign up and pay through Apple's infrastructure. That's how Apple supports and pays for its work on the platform.

CWallace
As Apple have already set a precedent with Spotify and Netflix (plus others) then, frankly, "Hey" should be allowed to do the same since they are not offering links to their website, either.
Score: 118 Votes (Like | Disagree)

Appleman3546
Good job Apple...give the EU some more evidence of anti-competitive behavior the day that the investigation is launched
Score: 110 Votes (Like | Disagree)

”That is obscene, and it's criminal, and I will spend every dollar that we have or ever make to burn this down until we get to somewhere better.”
Maybe build your own mobile operating system, build your own App Store, then put your own app in it. Boom! There’s a solution. Then you don’t have to pay anyone, except yourselves

To provide another Apple example, if Hey wanted to distribute a Mac app they'd be able to do so without having to implement in-app purchases, outside of the app store.

I wish people would stop the excuse that "Apple is letting you use your store; you should compensate them for that." Apple isn't LETTING you use their store, they're FORCING you to use it just to have access to a significant portion of the market.

SteveJobs2.0
Hey is developed by a small business and is relatively unknown. It is more difficult to boss around bigger players like Netflix or Spotify.
Score: 49 Votes (Like | Disagree)