Apple Brings Apple Developer App to Mac Ahead of WWDC

Apple's 2020 WWDC event will mark the first time that WWDC has been held in an all-digital format, with no physical conference or meetup. With everything taking place online, Apple today expanded its Apple Developer app to the Mac. 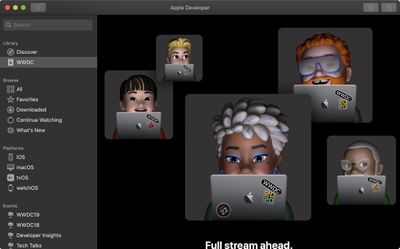 The Mac version of the Apple Developer app will mirror the iOS version, offering up a Discover section with new and relevant developer news, a videos section with sessions created by Apple engineers, and a WWDC section.

The WWDC section of the app will allow developers to access Apple's keynote event on Monday, June 22, as well as the Platforms State of the Union and more than 100 technical and design-focused engineering sessions.

Content from past WWDC events is also included in the app and neatly organized to make it easy for developers to find exactly what they're looking for.

ncollingridge
The article should mention that this app is only available to those who have dared to make the leap to Catalina. That does not include me, and won't until I see a release of Catalina that addresses the issues that other shave experienced, and acknowledges that it has done so in the release notes. Apple needs to rebuild confidence that their OS is stable and that manifestly has not yet been achieved for Catalina.
Score: 8 Votes (Like | Disagree)

casperes1996
I would've loved it if it was actually a Cocoa/AppKit app. I'm not ready to go full Catalina yet
Score: 5 Votes (Like | Disagree)

The Clark
Well at least something good came from me upgrading to Catalina ?
Score: 4 Votes (Like | Disagree)

KALLT
It has the look and feel of a low-effort Catalyst app. At least there is now a way to view and save session videos without having to keep bookmarks and download each video manually. It is also very small (< 7 MB) and not a Electron app.
Score: 3 Votes (Like | Disagree)

The "D" in WWDC is for "Developers". It's reasonable to expect your devs to stay abreast of your release cycle, and it's just bad messaging to tell your devs "we're going to pander to people who want to stay on an old version of the OS because we think we're bad at this, but you guys should really stay on the cutting edge".

Utilising features in the latest releases ≠ only supporting the latest release. Frankly, I don't think Apple would want 100% of macOS apps to suddenly stop supporting older releases of the OS. And in a lot of their talks they actually talk about "making it work well on our latest releases as well as earlier operating systems".
It's not that I don't have a Catalina install. I do. For testing software development funnily enough. But I also have a Mojave install and a Linux Mint, and Mojave is my primary OS.
It's also not that I don't understand their choice to make it a Catalyst app. And it's better than nothing, and that is probably what we would otherwise have had. They weren't going to spend the energy effort and cash on developing a dedicated Mac version, but Catalyst meant they could do it easily enough that it was worth it.

I didn't say I didn't understand them making it a Catalyst app, though I don't think your reasoning necessarily has so much to do with it, but I would still have loved a Cocoa version

If you are the intended audience of this app aka an Apple platform developer then you likely already made the leap... You gotta be running Catalina to run Xcode 11.5.

I was going to say the same thing. If you’re a developer, you probably have a Mac with Catalina already. If not, watch the keynote online and leave the rest of the conference for the devs it’s meant for.

There are plenty of reasons as a developer to not switch your primary platform to Catalina. I have a Catalina install on an external drive that I use for testing, but the majority of my work, both personal and development, is still done on Mojave and there's nothing wrong with that. In fact, I'd bet you that there are also Apple engineers with Mojave installations, though perhaps a majority being the other way around from what I described, primarily using Catalina and testing computability with Mojave.
Score: 2 Votes (Like | Disagree)
Read All Comments