Apple appears to have a bunch of new products ready to launch in the near future, led by the long-rumored iPad Pro, which is now looking like it may come alongside a new Smart Keyboard that even includes a trackpad.

Powerbeats4 earphones also appear to be imminent, while Target has a ton of new placeholder listings in its inventory system that may point toward updates for a lot of other Apple products. 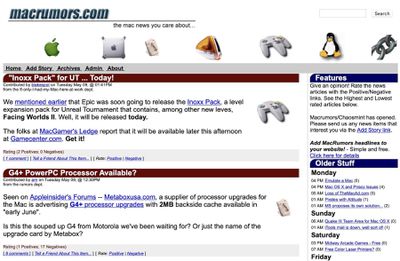 MacRumors as it appeared in May 2000
Read on for all of the details on those stories and more, and celebrate the 20th birthday of MacRumors!

Apple's plans may change due to the uncertainty of the COVID-19 coronavirus outbreak, but CEO Tim Cook this week said he feels that "China is getting the coronavirus under control."

Another product release on Apple's horizon appears to be Powerbeats4 wireless earphones, which received FCC approval this week ahead of their launch.

While an Apple event in March is certainly a possibility, the Powerbeats4 will likely be announced within the coming days or weeks via press release.

"Powerbeats4" should be an upgraded version of Powerbeats3 with an Apple-designed H1 chip for hands-free "Hey Siri" voice commands and "Announce Messages with Siri." Apple already released Powerbeats Pro with "Hey Siri" support for $249 last year.

Apple is planning to release an iPad Pro keyboard with a built-in trackpad later this year, according to a report from The Information this week.

Last month, a separate report claimed that Apple is working on an iPad keyboard with backlit keys and scissor switches, so those features could also be part of this new Smart Keyboard with a trackpad.

Apple's first Mac with a processor designed in house is set to be released during the first half of 2021, according to analyst Ming-Chi Kuo.

There are no other details provided, but multiple rumors in the past have suggested that Apple is working on custom Arm-based processors that would allow it to transition away from its current supplier Intel.

Apple's rumored Tile-like "AirTags" item trackers will be "completely waterproof" and use similar magnetic wireless charging to that seen on the Apple Watch, according to Japanese blog Mac Otakara.

MacRumors uncovered evidence of Apple working on item tracking tags in iOS 13 code last year, including an unreleased "Items" tab in the Find My app and a potential "AirTag" name for the tags, which would attach to everyday belongings like keys and backpacks for tracking purposes.

The tags will support Ultra Wideband and launch in the first half of 2020, according to analyst Ming-Chi Kuo. Ultra Wideband support would allow for more precise location accuracy than Wi-Fi or Bluetooth LE.

MacRumors is 20 Years Old This Week

While longtime readers may be familiar with the site's origins, there are plenty of others who are unaware that it began as a hobby while our founder Arnold Kim was a medical student, and it remained a side project for over eight years until he decided to give up medicine to focus on MacRumors as a full-time career.

Kim reflected on the site's beginnings in a 2008 article in The New York Times.

Pearple
If Apple leaves Intel, then Im out.
Score: 7 Votes (Like | Disagree)

If Apple leaves Intel, then Im out.

That’s what a lot of people said in 2005 the other way around.

Why can’t we move to ARM, would it be so bad?

It wouldn't be bad at all. In fact, it's very likely that we'd get increased battery life, if not also better performance (Apple has impressed greatly with their iDevice CPUs. I'd be willing to believe they could compete with Intel at this point). People are concerned about not being able to run their existing programs, but that won't be an issue either. Apple has in the past provided compatibility layers to make transitions such as this go smoothly, and you can bet they'll do the same thing this time.

Can I dual boot to Windows on ARM based MBP?

You won't be able to boot the normal Windows which runs on Intel-based PCs, but there is a version of Windows on ARM which can run many of the same programs. It's very possible that Microsoft will at some point offer a way to install that on a Mac.

With that said, Boot Camp is a very rarely used feature, so it's possible Apple will just not worry about it.
Score: 6 Votes (Like | Disagree)

That’s what a lot of people said in 2005 the other way around.

...and, probably, also in 1994 when they switched from 68000 to PPC, not to mention the early 00s when they dumped classic MacOS 9 for the totally different NextStep/Unix-based OS X (the latter was probably a bigger deal than a CPU switch as it meant everything had to be significantly re-written - not just the relatively small proportion of code that was CPU dependent).

The two snags with the ARM are:
[LIST=1]
* In the past, they were moving to significantly all-round faster chips, which partly mitigated the slow-down when using the 68k Emulator/Rosetta to run legacy software. The incentive to change to ARM is power consumption, better-tailored systems-on-a-chip with better low-end GPUs, and - if the change reaches the 'pro' end - more cores and extra acceleration gizmos per chip. There's unlikely to be a big jump in raw, single-threaded CPU performance - so even if there are no legal barriers to x86/x86-64 emulation its going to slow things down.
* Good-bye running Windows under Bootcamp/Parallels/VMWare - although you'll probably still be able to virtualise Linux-for-ARM (which has been a thing since the 1990s and already runs a lot of the important Linux software). Maybe you'll be able to run the new version of Windows for ARM, but that's probably not why you want to run Windows. Anyway, making the Mac the best Windows computer might not be Apple's priority...

Apart from that, the Mac application "code base" in 2020 should be in a lot better health (in terms of being 64-bit clean, little-endian, mostly written in CPU-independent high-level languages and using official OS services instead of CPU-specific code) than it was in 2005 or 1994 and large swathes really should be just 'tick the ARM box and re-build').

Apple will be doing just overpriced toys for hipsters.

I wasn't aware that the $400 wheels or the $999 display stand had ARM processors... but, otherwise, Apple is quite capable of doing that using Intel CPUs. They could, for example, lock MacOS down to App-store-only tomorrow if they felt inclined. Switching to ARM would be a good smokescreen for that, but it's not a justification.
Score: 5 Votes (Like | Disagree)

You need to design bleeding-edge speed, low heat/power consumption, and ensure the best Bootcamp-Windows experience ever. Macbooks and iMacs that can provide an outstanding, bootable, dual-OS experience will dominate.

There’s nothing in it for Apple to design a machine to run windows. This isn’t 1995 anymore. Apple sells only four million or so Macs a month. Most of them never use boot camp.

it’s far more important that Apple provides support for Mac users to use the same software they run on iOS. Even iPad far outsells Mac, and iPhone does so by tremendous margins.

if apple loses every boot camp customer for ever, they’ll never even notice it.
Score: 3 Votes (Like | Disagree)