Target's inventory system may be leaking details on upcoming Apple products that are set to be released in the near future. A listing for "Airpods (X Generation)" with a price tag of $399 popped up this morning, and there are also apparently new listings for "Apple TV Gen X," "Apple iPod Touch X Generation" and "Apple Watch Series X" bands. 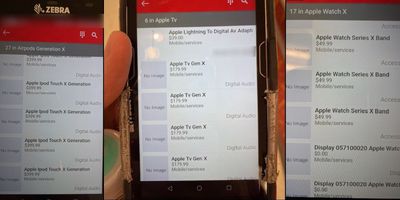 Target employees sent images of the listings to 9to5Mac. These are all placeholder names and could be representative of future products, though it's not clear if that's the case. We don't know what these listings are, why they're in Target's system, or if they're accurate, so the information should not be taken as concrete evidence of new devices.

There haven't been rumors of an upgraded iPod Touch, and the iPod touch last saw a refresh in May 2019, so it's not clear if the $399 iPod touch listing is correct. Pricing on the iPod touch starts at $199, and while it does go up to $399, that's for the high capacity model. We are expecting a new low-cost iPhone with a starting price point of $399, so there is a possibility that the iPod touch placeholder is for an ‌iPhone‌ and not an iPod. It could also be for a refreshed 256GB iPod touch, or the price could be wrong entirely since it's a placeholder.

We've seen multiple previous hints of a new ‌Apple TV‌ in the works in iOS 13 releases, with the device featuring an upgraded A12 Bionic chip. $179 is the price point of the 32GB 4K ‌Apple TV‌, so it's possible that this listing is more evidence of the imminent release of a new ‌Apple TV‌ model.

The Apple Watch band listings are also easily explainable as Apple refreshes its Apple Watch band offerings on a regular basis, typically with every Apple event. Apple has held events in March for the last few years, and rumors suggest that we're getting a late March event this year, perhaps on March 31st.

If there is indeed a March 31st event, we could see some of the products listed in Target's inventory. Rumors have suggested the new low-cost ‌iPhone‌ will be a highlight at the event, and an ‌Apple TV‌, an updated iPad Pro, and the rumored AirTags are also possible new products that could debut next month.

Here's hoping the remote isn't complete garbage on this one.
Score: 35 Votes (Like | Disagree)

cmaier
Real curious what the new Apple TV will bring us.
Score: 21 Votes (Like | Disagree)

Here's hoping the remote isn't complete garbage on this one.

Complete garbage seems a bit harsh. I don’t see the hate, I manage just fine with the touch bad.
Score: 11 Votes (Like | Disagree)

The iPod touch product is super interesting as that is still rocking an old chip, has no Touch or Face ID system and is the only 4 inch device still actively sold. I don’t need one, but I’d be interested to see what they do to update such a device.

Great! It's about time Apple came out with a product line marketed specifically at Gen X.

The Millennials (and the Boomers for that matter) get too much attention these days!
Score: 9 Votes (Like | Disagree)
Read All Comments