It's hard to believe, but today marks the 20th birthday of MacRumors, which was founded on February 24, 2000, with articles starting just a few days later. 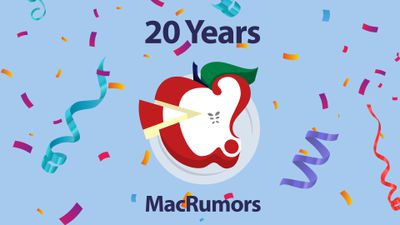 While longtime readers may be familiar with the site's origins, there are plenty of others who are unaware that it began as a hobby while our founder Arnold Kim was a medical student, and it remained a side project for over eight years until he decided to give up medicine to focus on MacRumors as a full-time career. That backstory and additional perspective were shared in a July 2008 New York Times article.

MacRumors.com registered on February 24, 2000
I officially joined MacRumors on January, 1, 2009, but I had served as a volunteer forum staff member and occasional writer for several years prior and had been a regular reader almost since the site's debut. Over that time, I saw MacRumors grow from a niche aggregator of news about a beloved company looking to raise itself from the dead to the behemoth it is today, riding the wave of one hit product after another with the iPod, iPhone, iPad, and more.

MacRumors as it appeared in May 2000
Through the years, we've added additional writers, editors, and other staff members, with the team now numbering roughly a dozen dedicated folks who live and breathe Apple news and rumors.

We've covered plenty of major Apple news stories over the years, and here are just a few of the biggest ones:

And don't forget about the MacRumors Buyer's Guide, which has been providing at-a-glance buying recommendations based on Apple's product release schedules for 17 years now.

It's been a long ride, and we certainly couldn't have done it without our loyal readers and forum members. For two decades now, MacRumors has been known for its active and passionate community that has itself reached nearly a million registered members and over 27 million forum posts. If you're not a member, we invite you to register for our forums and add your voice to our community.

To all of you who have helped make MacRumors what it is today, thank you, and here's to another 20 years.

benshive
A big thing that separates MacRumors from other Apple news sites is the community. I love interacting with everyone on the forums as much as I love reading the articles. Here's to another 20 :)
Score: 27 Votes (Like | Disagree)

ProcessorSolderedToMB
20 years of me refreshing over and over again waiting for a Mac that will never come...

Jacobi
I like how on the iPhone announcement thread, one of the first comments is that it was a waste of a keynote. Classic MacRumors forums. ;)
Score: 4 Votes (Like | Disagree)