Apple is rumored to be working on a Tile-like Bluetooth tracking device called AirTags, which we've been seeing signs of in various versions of iOS for the last couple of months.

We have additional ‌AirTags‌ screenshots to share today, sent in by a MacRumors reader. The updated images are similar to images that we found in an early version of iOS 13 back in September, but with some updates that are more in line with the current look of the Find My app. 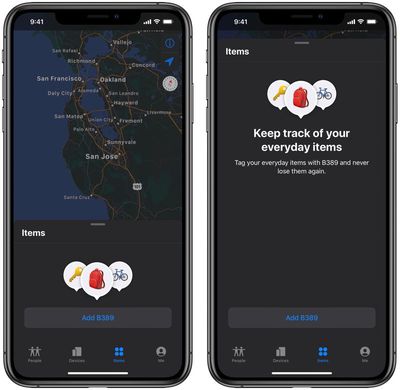 Both screenshots depict an updated ‌Find My‌ app with a bar at the bottom for "People," "Devices," "Items," and "Me." The earlier screenshots that we saw didn't have the "Me" option in the bottom bar, suggesting Apple was still in the process of refining the look of the app.

The placeholder suitcase emoji that was used in the original screenshot has also now been updated with a backpack emoji.

The screenshots are otherwise the same, referring to the ‌AirTags‌ by their codename, "B389." The ‌AirTags‌ setup process, as we discovered earlier this week in a separate screenshot, will consist of pulling the tab on the AirTag and then bringing it close to the iPhone to begin the setup process.

From there, the ‌AirTags‌ will presumably connect to the ‌iPhone‌ and that's when users will see the "Add" option with Apple's wording: "Tag your everyday items with [‌AirTags‌] and never lose them again."

The ‌AirTags‌ name was first unveiled earlier this week in assets found in the iOS 13.2 update. We've also previously seen placeholder images that suggest the ‌AirTags‌ could perhaps be small, circular white tags that can be attached to items to make them locatable through the ‌Find My‌ app.

‌‌AirTags‌‌ will connect to iPhones, iPads, Macs, and more via Bluetooth, and will leverage the ultra-wideband U1 chip in the newest iPhones for more precise indoor tracking that's unmatched by competitors like Tile.

We're also expecting an augmented reality component that will take advantage of a device's camera to pinpoint exactly where an item might be. Longer-range tracking will also be available, and ‌‌AirTags‌‌ will likely take advantage of the offline crowd-sourced tracking feature that was added in ‌iOS 13‌.

We don't yet know when ‌AirTags‌ might be released, but Apple has been adding new ‌AirTags‌ info to each beta, so there's a possibility that we could potentially see ‌AirTags‌ launch before the end of the year.

For more on what to expect from the ‌AirTags‌, make sure to check out our AirTags guide.

lunarworks
Lovin' the rainbow Apple logo, even if it's just a placeholder. They haven't forgotten it.
Score: 11 Votes (Like | Disagree)

CarpalMac
RIP Tile. If these work as expected (using any nearby iPhone) then their coverage will be almost laughable by comparison. Here's hoping the Apple pricing team can keep it in their pants.

I should really eBay my unopened pack of Tiles. ?
Score: 8 Votes (Like | Disagree)

AirTags? Really? What kind of company is Apple becoming?

just dont buy them then, i am looking forward to getting some
Score: 6 Votes (Like | Disagree)

H. Flower
For me, these things must be:

symphony
Hopefully I can use this to track my cheating horse of a wife.
Score: 5 Votes (Like | Disagree)

AirTags? Really? What kind of company is Apple becoming?

A diverse company.
Score: 4 Votes (Like | Disagree)
Read All Comments