Apple CEO Tim Cook: 'It Feels to Me China is Getting Coronavirus Under Control'

Apple CEO Tim Cook is in Birmingham, Alabama today, where he spoke at an event for EdFarm, which will offer Apple's Everyone Can Code curriculum alongside civil rights education conducted through augmented reality. 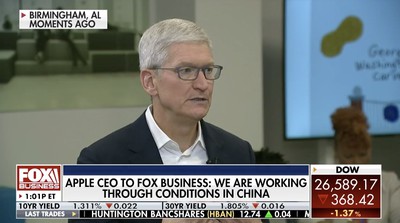 Following his EdFarm speech, Cook did an interview with Fox Business. The interview is set to air in full on Friday, but in a clip shared today, Cook spoke about the impact of the coronavirus on Apple's business.

According to Cook, he believes that China is starting to get the coronavirus under control, and that he is optimistic about things returning to normal.

It feels to me that China is getting the coronavirus under control. When you look at the numbers, they're coming down day by day by day. And so I'm very optimistic there.

Cook says that Apple's suppliers in China are getting back to work and that production is ramping up.

On the supplier side, we have suppliers, you know, iPhone is built everywhere in the world. We have key components coming from the United States, we have key parts that are in China, and so on and so forth. When you look at the parts that are done in China, we have reopened factories, so the factories were able to work through the conditions of opening. They're also in ramp, so I think of this as sort of the third phase of getting back to normal and we're in phase three of the ramp mode.

In the full interview set air on Friday, Cook will comment on the possibility of the coronavirus disruptions continuing past the second quarter of the year.

Cook's comments come two weeks after Apple announced that it would not meet its revenue goals for the March quarter due to store closures in China and supply issues. Apple is expected to share more information in its next earnings call, which is scheduled for April.

bladerunner2000
Of course he'd say that when China supplies all of Apple's parts. Apple's investors are more important to him than the reality of the virus. He's an idiot.
Score: 29 Votes (Like | Disagree)

imom
Cook's feelings are clearly much more important than facts. Where have I heard that before?
Score: 24 Votes (Like | Disagree)

This thing is barely starting...but i pray God helps us, things could turn nasty (already are for the chinese).
Score: 18 Votes (Like | Disagree)

Its all mass media hysteria. Look at the stats of what ages are affected and the likelyhood of infection. Sure, certain age group (very old people) are at risk but if you ask them they mostly say - "I have other things to worry about at my age".
This thing will settle just like everything else. Its just another fear media frenzy to keep us busy.
Compare the numbers to things like Flu etc. and that will paint another picture.
Overall, this is getting silly.

How is it media hysteria when its the governments that are putting measures in place?
Score: 16 Votes (Like | Disagree)

He has a fiduciary duty to his investors. Period.

Tim Cook has no integrity.
Score: 16 Votes (Like | Disagree)

Maybe it is time for Apple to re-think of building all it's products in the United States.

A literal impossibility. Most of their suppliers are overseas because Americans by and large suck at manufacturing.

Tim Cook has no integrity.

Do you get to stop doing your job due to coronavirus?

Because I don't. And Tim Cook doesn't either.
Score: 16 Votes (Like | Disagree)
Read All Comments

Monday July 13, 2020 6:50 am PDT by Joe Rossignol
Earlier this year, Apple agreed to settle a U.S. class action lawsuit that accused the company of "secretly throttling" older iPhone models. Now, eligible iPhone owners are beginning to be notified about their legal rights and options. Under the proposed settlement, Apple will provide a cash payment of approximately $25 to each eligible iPhone owner who submits a claim, with its total payout ...
Read Full Article • 137 comments