Upcoming Low-Cost iPhone Again Rumored to Be Priced at $399

Apple is planning to price its rumored low-cost iPhone at $399, according to a new report out this week from Fast Company. 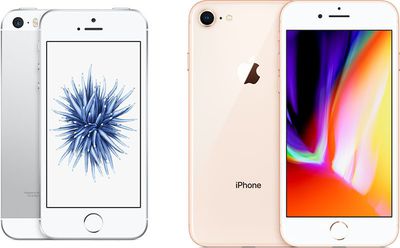 iPhone SE and ‌iPhone‌ 8
At $399, the new low-cost ‌iPhone‌ will have the same starting price as the 2016 ‌iPhone SE‌, which is why some people have referred to it as an "‌iPhone SE‌ 2." Others have been calling it the "‌iPhone‌ 9," but we don't yet know what Apple will name it.

We do know quite a bit about its specs, though, thanks to numerous leaks. The upcoming low-cost ‌iPhone‌ will be similar in design to the ‌iPhone‌ 8, with thicker top and bottom bezels and a Touch ID Home button.

It will be equipped with the same A13 chip that's available in the ‌iPhone‌ 11 and 11 Pro, and it is said to have 3GB RAM. To keep costs low, it will use a single-lens rear camera, though it's not known if the camera will be the same as the wide-angle camera in the ‌iPhone‌ 11. It could be available in 64 and 128GB size options, and colors are expected include Space Gray, Silver, and Red.

Render of low-cost ‌iPhone SE‌ from Onleaks
Production on the new low-cost ‌iPhone‌ was supposed to begin in February, but Apple's supplier factories are shut down at the current time due to the ongoing coronavirus outbreak in China. It's not clear if this will affect production plans and if the launch date of the ‌iPhone‌ will be delayed.

Prior rumors suggested we could see the new low-cost ‌iPhone‌ in the first half of 2020, perhaps in March. Apple often holds its first event of the year in March, and if there is indeed a March event in the works this year, we should be hearing about it soon.

The new low-cost ‌iPhone‌ is expected to be a popular ‌iPhone‌ upgrade option for those who are coming from an ‌iPhone‌ 6s or ‌iPhone‌ 7, as the design will be similar. It should also appeal to those who want an affordable ‌iPhone‌ option, those who like ‌Touch ID‌, and those who prefer smaller form factors, even though it won't be as small as the ‌iPhone SE‌, Apple's original low-cost ‌iPhone‌.

Seanm87
I have a feeling this thread will be less about this phone and more about why apple doesn't make a 4 inch phone anymore...
Score: 27 Votes (Like | Disagree)

somethingelsefl
MR Forums: “That’s too expensive. It should be free. Apple is greedy.”
Score: 18 Votes (Like | Disagree)

azentropy
Not everyone wants a huge phone and not everyone wants to spend $700+. I fit in the first category and will be getting one, but then would also get the 5.4" in September if it ends up being even smaller.
Score: 17 Votes (Like | Disagree)

LeeW
Whatever you say, whatever you think, at $399 it will be a winner at that end of the market.

It is not about Apple wanting to do a cheap phone, they had to do it to increase market share and sell more accessories and services.
Score: 17 Votes (Like | Disagree)

You’re paying for iOS as much as the hardware.

The only embarrassing thing will be in 3 years having that scratched up cheapo plastic Motorola that is slow as molasses and stuck on a 3-year-old OS.
Score: 12 Votes (Like | Disagree)
Read All Comments

Thursday September 29, 2022 12:38 pm PDT by Juli Clover
Tony Blevins, Apple's vice president of procurement, is set to depart the company after he made a crude comment about his profession in a recent TikTok video, reports Bloomberg. Blevins was in a video by TikTok creator Daniel Mac, who was doing a series on the jobs of people he spotted with expensive cars. After seeing Blevins in an expensive Mercedes-Benz SLR McLaren, Mac asked Blevins what ...
Read Full Article • 738 comments

Friday September 30, 2022 12:51 pm PDT by Juli Clover
Apple CEO Tim Cook has been touring Europe this week, sitting down for interviews with various media publications. Augmented reality has been a running theme in Cook's discussions, and it is a topic he brought up again in an interview with Dutch publication Bright, which is part of RTL News. "I think AR is a profound technology that will affect everything," Cook said, echoing comments from...
Read Full Article • 288 comments