OnLeaks, a well-known leaker who shared accurate renders of the iPhone 11 Pro over nine months before the device was unveiled, has returned with new concept art for the so-called "iPhone 9" or "iPhone SE 2" by way of iGeeksBlog.

In line with earlier predictions from analyst Ming-Chi Kuo, OnLeaks expects the iPhone 9 to resemble the iPhone 8, including a 4.7-inch LCD display with thick bezels, Touch ID home button, and single-lens rear camera. And unlike the original iPhone SE, the device would not have a headphone jack. 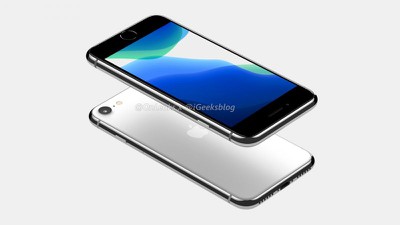 A key upgrade to the iPhone 9 would be a faster A13 Bionic chip, and the device is expected to lack hardware-based 3D Touch.

Where things get less certain is materials. While the renders depict the iPhone 9 with a polished metal frame and a frosted glass back like the iPhone 11 Pro, OnLeaks tells us that these design aspects are purely his assumptions. With the iPhone 9 predicted to start around $399, it is possible that Apple will stick with some cheaper materials like the matte aluminum frame on the iPhone 8.

OnLeaks expects the iPhone 9 to be 7.8mm thick, which would be 0.5mm thicker than the iPhone 8, while the height and width of the device will supposedly be virtually identical to the iPhone 8 at around 138.5mm x 67.4mm. Unlike the materials shown in the renders, OnLeaks tells us that these dimensions are not assumptions.

Ming-Chi Kuo previously said the iPhone 9 will be released by the end of March. He expects the device to have 64GB and 128GB storage options, with Space Gray, Silver, and (PRODUCT)RED color options.

A phone that could take you on a trip through our solar system and land you back on earth safely wouldn't be good enough for people here.
Score: 26 Votes (Like | Disagree)

Baymowe335
It won’t be good enough for people here.
Score: 19 Votes (Like | Disagree)

otternonsense
Will they ever create something new for a smaller form factor and quit milking the iPhone 6? Enough already! Cook is stingier with new tooling than he is with employee working conditions in China. It was already showing its age since the iPhone 7, where the ONLY change was the courageous headphone jack removal.

To all apologists out there: no, just because it still sells, and just because it's meant to be the "budget" option does NOT excuse this level of expedient laziness and complacency. It's still Apple, for crying out loud.

I wonder if Dieter Bonn would call that a "parts-bin" phone and not "the best iPhone for most people".
Score: 13 Votes (Like | Disagree)

While for others it’s another case of Apple can do no wrong. Can’t be made better. Best execution ever. Lol

fwiw I think it’s fine. Great phone for those needing a budget one or kids. Not much to see here. It’s an 8S basically. Just boring though.
Score: 12 Votes (Like | Disagree)

It never is, though Im in the camp of people that would love a small 4.7 inch iphone 11 with a single camera and outstanding battery life, I guess everyone has its own idea of what a “perfect iphone” should be.
Score: 11 Votes (Like | Disagree)

You do have to ask why Apple continues to milk customers with thick bezel phones while competitors are offering full screen phones even in their low-end models.
Score: 9 Votes (Like | Disagree)
Read All Comments

Monday August 2, 2021 2:12 am PDT by Sami Fathi
For future iPhones, iPads, and MacBooks, Apple plans to use smaller internal components in an effort to increase the size of the device's battery, according to DigiTimes. Image Credit: iFixit Specifically, Apple plans to "significantly increase the adoption" of IPDs or integrated passive devices for the peripheral chips in its products. These news chips will be slimmer in size and allow for...
Read Full Article • 61 comments

Monday August 2, 2021 8:00 am PDT by Sami Fathi
The iPhone 13 is widely expected to come with Wi-Fi 6E capabilities, and while it may seem rather nuanced to the average consumer, with only improved speeds and being "up to date" in the realm of Wi-Fi technology, it's actually a fairly significant improvement, laying the groundwork for much of what we know the future holds. To truly understand Wi-Fi 6E, MacRumors sat down for an exclusive...
Read Full Article • 65 comments