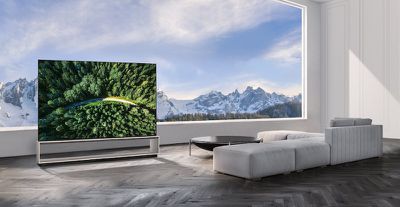 ‌AirPlay‌ 2 support will enable users to stream videos, music, podcasts, and more directly from an iPhone, iPad, or Mac to these TVs, with no Apple TV box necessary. And with ‌HomeKit‌, users can easily control the TV's power, volume, source, and more using Siri or the Home app on ‌iPhone‌, ‌iPad‌, and Mac.

LG says the 88-inch model is the largest OLED TV ever, with an 8K Ultra HD resolution of 7,680x4,320 for a total of nearly 33 million pixels. The TV features a slim-bezel display with a brushed aluminum stand and comes with an integrated 80W speaker system that is said to deliver powerful sound.

Many customers have petitioned LG to offer ‌AirPlay‌ 2 and ‌HomeKit‌ on its older smart TVs, but the company has not budged so far, noting that it "cannot guarantee" that pre-2019 models "will be able to deliver a seamless user experience." LG did note that it "may be a possibility in the future."

‌AirPlay‌ 2 and ‌HomeKit‌ are also available on select Vizio smart TVs, and Sony promised to roll out the features in summer 2019, but it has yet to do so. Samsung offers an ‌Apple TV‌ app and ‌AirPlay‌ 2, but not ‌HomeKit‌, on select TVs.

topgunn
Does it come with a stand?
Score: 27 Votes (Like | Disagree)

zubikov
If I had a mountain chalet with a 30 ft panoramic window overlooking the Alps, the first and only thing I would put in front of it would be a giant TV.
Score: 16 Votes (Like | Disagree)

Who’s going to afford this?

Freida
Who has a living room like that? I would love to have that view :)
Score: 15 Votes (Like | Disagree)

mattopotamus
For the cool price of a car.

I could build a kick ass home theater with a 120" projector for that cost. By that cost, I mean $20K less. There is something severely wrong with pricing when the 75" is $5K.
Score: 14 Votes (Like | Disagree)

There is something severely wrong with pricing when the 75" is $5K.