Following months of beta testing, Vizio today announced that AirPlay 2 and HomeKit are now rolling out to its 2016 and newer SmartCast TVs via an over-the-air firmware update. The rollout will continue over the coming months. 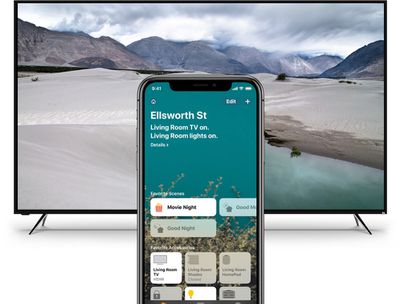 AirPlay 2 support enables users to stream videos, music, podcasts, photos, and more directly from an iPhone, iPad, or Mac to a compatible Vizio TV, with no Apple TV necessary. And with HomeKit, users can easily control the TV's power, volume, and more using Siri or the Home app on iPhone, iPad, and Mac.

AirPlay 2 and HomeKit are rolling out to the following Vizio SmartCast TVs:

MacRumors demoed AirPlay 2 and HomeKit on a Vizio SmartCast TV during the beta testing period:


LG also began rolling out AirPlay 2 and HomeKit to select 2019 TVs over the last week, and Sony plans to follow suit later this summer. Samsung also offers AirPlay 2 and an Apple TV app on on select TVs, but not HomeKit.
Tags: HomeKit Guide, AirPlay 2, Vizio
[ 75 comments ]

Yup, it’s like the TV makers want TVs to be the new phones and get people to upgrade every year. It’s disgusting given all the waste produced.
Score: 13 Votes (Like | Disagree)

What year is it?

Curious...what's the advantage of having Airplay 2 functionality on a TV if you already have an Apple TV connected?

Anyone on your wifi can sling video or audio easily to the TV. It's a convenience play.
[doublepost=1564585647][/doublepost]

To those who are "outraged" that their tv is not getting this update...why don't you already have an Apple TV?
I mean, if AirPlay is THAT important. Just sayin'. :rolleyes:

I think the outrage is that a budget brand like Vizio is doing this for older TVs, while "premium" brands like LG and Samsung are bailing after a single year (LG) or not even offering the actual solution completely (Samsung). Given the audience here, where you expect superior support in exchange for that extra money, people are naturally wondering what that extra money was for.
Score: 6 Votes (Like | Disagree)

Yup, it’s like the TV makers want TVs to be the new phones and get people to upgrade every year. It’s disgusting given all the waste produced.

Seriously. Especially with how little the TVs change year to year and there is barely any 4k content thats broadcasted still and they want to just move to 8k next. its nuts.
Score: 5 Votes (Like | Disagree)

jetjaguar
Crazy that LG wont update the 2018s with this
Score: 5 Votes (Like | Disagree)
Read All Comments