Sony's Upcoming Smart TVs to Receive AirPlay 2 and HomeKit in Summer 2019, Including $70,000 Model

Sony today announced that some of its upcoming smart TVs will support AirPlay 2 and HomeKit in summer 2019, including its A9G series of 4K OLED TVs, Z9G series of 8K LED TVs, and X950G series of 4K LED TVs. 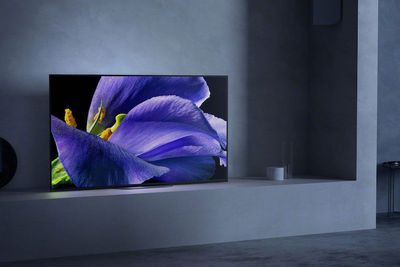 The TVs themselves will be released on a staggered basis, starting with the X950G series in late April and followed by additional models in May and June, including a 98-inch 8K TV for a whopping $70,000. ‌AirPlay‌ 2 and ‌HomeKit‌ will presumably be rolled out in a subsequent software update.

Apple also lists Sony's upcoming X850G series of 4K TVs in its AirPlay 2–enabled TVs list, but no timeframe for those features was provided for that model.

Lol, Apple straight up giving up on the Apple TV because they’re so damn thirsty for cash and see streaming as a golden carrot being held up in front of them. Pathetic. No one wants their crappy streaming service, can’t wait to see them fail lol...

More hits to the knee so it bends, a little more humbling in order for them. (If it’s even possible to do so, with their heads so far up in the clouds.. :rolleyes:)

How is this giving up on Apple TV? Did Roku give up on Rokus by doing the same?

Your description of Apple's "thirst" for cash is just mindboggling. We don't even know that this is a paid service yet and here you are declaring they're trying to turn it into their life's blood.
Score: 6 Votes (Like | Disagree)

No one wants their crappy streaming service

1) ‘No one wants’: I’d love to hear more about the consumer research you’ve completed since this was announced last month.

2) ‘Crappy streaming service’: Presuming you’ve used it then, I’d love to find out more about the different shows since the launch event didn’t go into detail episode by episode. Could you share with us all, as I’m sure other people would be interested too?
Score: 5 Votes (Like | Disagree)

macduke
You need a TV well over 120" to see a difference between 8K and 4K unless you're only sitting a couple feet away. And if you're sitting a couple feet away from a 100" display then you have deeper issues that I can't help you with. Not even to mention there isn't 8K content and you can't even get everything in 4K yet. What a pointless TV.
Score: 5 Votes (Like | Disagree)

Baymowe335
This seems like a stretch, even for MacRumors.

The Sony TV OS experience is soooooooooooooooo bad. Gee, I wonder why.
Score: 4 Votes (Like | Disagree)
Read All Comments