Apple this week disclosed that 88 percent of active iPhone, iPad, and iPod touch devices are running iOS 12, as measured by the App Store on August 6, 2019. iOS 12 adoption continues to outpace iOS 11, which was installed on 85 percent of active devices as of September 3, 2018, according to Apple. 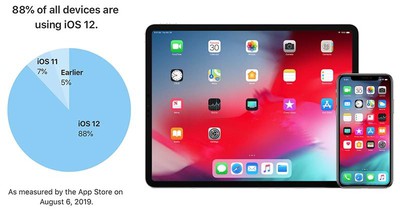 The updated stats, highlighted by Rene Ritchie, also reveal that seven percent of active devices continue to run iOS 11, with five percent using an earlier version. This includes older devices that are incompatible with the latest iOS versions.

iOS 12 outpacing iOS 11 in adoption is not much of a surprise, as iOS 11 was plagued by several problems last year, including at least three bugs that could crash the entire system, a HomeKit vulnerability, an iPhone camera autofocus issue, autocorrect bugs, the iPhone X glitching in cold weather, and more.

In January 2018, multiple reports claimed that Apple delayed several new features planned for iOS 12 to focus on performance, stability, and bug fixes, and the software update has indeed proven to be much more reliable.

Looking ahead, Apple is now in the latter stages of beta testing iOS 13, which will be publicly released in September.

otternonsense
I'm sure the constant pop-up reminders to update your iOS (if you haven't already), without giving the user any call to action to refuse, and auto-downloading the new iOS installer in the background had nothing to do with that. /sarcasm
Score: 18 Votes (Like | Disagree)

dwsolberg
What surprises me is that anyone is still on iOS 11. iOS 12 is better in every way, including speed. My guess is that some people’s phones are too full to upgrade, because that’s the only reason not to upgrade.
Score: 6 Votes (Like | Disagree)

Android is a joke for the same reason Linux is a joke (and has never taken over Windows despite repeated claims "This is the year of Linux on the desktop" for the past 20 years. Apps.

An operating system is USELESS without software to run on it. So while Linux has many useful & powerful features that Windows lacks, they aren't enough to make it as useful overall as Windows. Same with Android vs iOS. The quality gap between iOS and Android is significant (esp on tablets where Android is an utter and complete joke).

Also interesting you left out all the things iOS had before Android (and the list is very long). Why is that?
Score: 3 Votes (Like | Disagree)

brock2621
It's a solid update, and i'm very happy with the beta of ios 13 as well, especially on the ipad. I've used it 3x fold as much now; just genuinely increase in usefulness. Kudos apple
Score: 2 Votes (Like | Disagree)
Read All Comments

Monday May 17, 2021 6:06 am PDT by Joe Rossignol
Apple today announced that Apple Music will be gaining support for Spatial Audio with Dolby Atmos at no additional cost starting in June. At launch, Apple Music subscribers will have access to thousands of songs in Spatial Audio from artists like J Balvin, Gustavo Dudamel, Ariana Grande, Maroon 5, Kacey Musgraves, The Weeknd, and many others. Apple says this feature will provide a...
Read Full Article • 423 comments