In addition to introducing support for Messages in iCloud, AirPlay 2, and stereo pairing for the HomePod, the new iOS 11.4 update, released this morning, introduces fixes for several high-profile bugs that have been plaguing iOS 11 users for months now.

First and foremost, the update addresses the "Black Dot" unicode bug that could crash apps on iOS devices with a specific character sequence involving certain emojis. Following the release of iOS 11.4, this particular sequence of characters will no longer cause apps like Messages to crash. 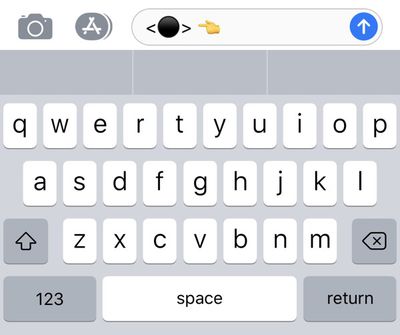 Apple says the update also successfully fixes an issue that caused iMessages to appear out of order on some devices, a frustrating bug that's been around for quite some time and has been the subject of many complaints.

The third major bug addressed in today's update is one that caused an app on the Home screen to appear in the wrong location, often hovering out of place above other apps. This is another bug that received widespread attention given the high number of users who saw the problem occur.

Image from MacRumors reader Paulold
There are several additional bug fixes included in iOS 11.4, as outlined below in Apple's release notes:

The iOS 11.4 update is available for download on all devices capable of running iOS 11, which includes the iPhone 5s and later, the iPad mini 2 and later, the iPad Air and later, and the 6th-generation iPod touch. You can download the update by going to Settings --> General --> Software Update. All of the new features in iOS 11.4 are outlined in our video below.

Subscribe to the MacRumors YouTube channel for more videos.
We expect iOS 11.4 to be one of the last updates to the iOS 11 operating system as Apple is preparing to introduce iOS 12 at the Worldwide Developers Conference next Monday. iOS 12 will be available in a beta capacity for developers and public beta testers ahead of a public launch in the fall.
Related Forum: iOS 11
[ 89 comments ]

ignatius345
iMessage in the cloud is all well and good, but doesn't really solve anything for me since it's not yet supported on the Mac.
Score: 18 Votes (Like | Disagree)

No. 44
Does it fix the issue where Siri doesn't understand anything?
Score: 16 Votes (Like | Disagree)

iMessage in the cloud is all well and good, but doesn't really solve anything for me since it's not yet supported on the Mac.

JackieTreehorn
I updated, but I am still seeing those ‘Safari feels snappier’ posts.

itsmilo
7 or so iOS versions later and they still have not fixed this super annoying bug in iMessage where you delete a bunch of attached images at once. Go back inside and some of those pics you just deleted are still present which means you have to do the same thing all over multiple times. It even happens on the Mac

Also give me a freaking delete all button

It is also stupid that attached images do not sync with iCloud Message ... it’s what i was looking for, like why can I not delete images on Messages and they r gone on each device? Nope in fact they added another step. Now I have to load the images from the cloud to my device first before I can delete them, why not let me delete them straight from the cloud like iCloud Photos??? Stupid
Score: 6 Votes (Like | Disagree)

iCloud for iMessage wasn't turned on by default, had to go into settings to turn it on.
Score: 3 Votes (Like | Disagree)
Read All Comments