By MacRumors Staff on July 15, 2021
Jump to Guides Articles

Apple has apologized for not better explaining how battery health could impact performance and has since implemented a policy offering no-questions-asked $29 battery replacements for the iPhone 6 and later.

iOS 11.3 introduced more detailed information about battery health, letting customers know if the state of their battery is impacting processor performance. The update also allows the power management feature to be turned off. Initially, the iPhone 6, 6 Plus, 6s, 6s Plus, 7, 7 Plus, and first-generation SE were included, with the processor only slowed down occasionally when the battery can't meet the power demands of system-intensive tasks. The iPhone 8, 8 Plus and X were included as of iOS 12.1, and the iPhone XS, XS Max, and XR were added with iOS 13.1.

Replacing a degraded battery with a fresh battery successfully eliminates the power management feature and restores a device that was previously being throttled to its full performance capacity.

Apple is facing multiple lawsuits and government inquiries about its decision to throttle processor performance, but the company is adamant that the feature was not introduced to prompt customers to buy a new iPhone. Instead, it is meant to extend the life of an iPhone as long as possible, because in Apple's opinion, an iPhone that occasionally sees slower performance is preferable to one that shuts down.

To regain customer trust following criticism over its failure to disclose the throttling, Apple offered $29 battery replacements through the end of 2018 as well as a $50 credit to customers who paid for an out-of-warranty battery replacement for the iPhone 6 and later in 2017.

How to Disable Apple's Performance Management Features in Older iPhones in the iOS 11.3 Beta

Tuesday February 6, 2018 12:53 pm PST by Juli Clover
Starting with the second beta of iOS 11.3, Apple has introduced a new "Battery Health" feature that's designed to provide you with more information about the state of your battery and whether or not it's impacting device performance. If your iPhone has a degraded battery that is leading to throttling issues, the "Battery Health" section will let you know about it, and it will provide an...
Read Full Article (73 comments) 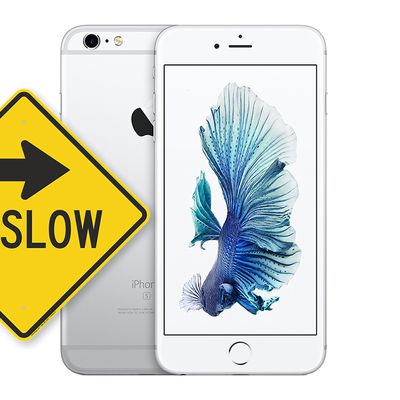 Thursday April 8, 2021 2:25 pm PDT by Juli Clover
Apple will pay $3.4 million in Chile to settle a lawsuit that accused the Cupertino company of programming a limited lifespan into some of its products to force consumers to upgrade. 150,000 iPhone 6, 6 Plus, 6s Plus, 7, 7 Plus, and SE owners sued Apple over the same "iPhone Slowdown" issue that Apple has been battling since 2017. Registered participants in Chile can get a maximum of $50. ...
Read Full Article 112 comments

Monday March 1, 2021 6:44 am PST by Sami Fathi
Apple faces a new class-action lawsuit that accuses it of deliberately releasing iOS updates that slowly reduce the performance of an iPhone, forcing customers to upgrade their devices. The lawsuit comes from the Portuguese Consumer Protection Agency, Deco Proteste (via Marketeer), which in a statement says that it will proceed with a case against the Cupertino tech giant because it...
Read Full Article 312 comments

Monday January 25, 2021 10:42 am PST by Juli Clover
Italian consumer association Altroconsumo today announced that it has launched a class action lawsuit [PDF] against Apple for planned obsolescence (via Reuters). Altroconsumo is seeking damages of 60 million euros on behalf of Italian consumers who were "tricked" by the practice, with the lawsuit covering the iPhone 6, ‌iPhone‌ 6 Plus, ‌iPhone‌ 6s, and ‌iPhone‌ 6s Plus."When consumers buy...
Read Full Article 165 comments

Wednesday December 2, 2020 4:06 am PST by Tim Hardwick
An EU consumer advocacy group has filed class-action lawsuits against Apple in both Belgium and Spain for "unfair and misleading commercial practices" related to the iPhone performance management system it introduced in iOS 10.2.1 without informing customers. Brought by Euroconsumers, which describes itself as the "world's leading consumer cluster organization," the suits allege that the...
Read Full Article 119 comments

Monday July 13, 2020 7:50 am PDT by Joe Rossignol
Earlier this year, Apple agreed to settle a U.S. class action lawsuit that accused the company of "secretly throttling" older iPhone models. Now, eligible iPhone owners are beginning to be notified about their legal rights and options. Under the proposed settlement, Apple will provide a cash payment of approximately $25 to each eligible iPhone owner who submits a claim, with its total payout ...
Read Full Article 169 comments

Monday March 2, 2020 8:35 am PST by Joe Rossignol
Apple has agreed to pay up to $500 million to settle a long-running class action lawsuit in the United States that accused the company of "secretly throttling" older iPhone models, as reported by Reuters. Each affected iPhone user in the class would receive $25, according to the preliminary settlement, reviewed by MacRumors. The amount could increase or decrease slightly depending on legal...
Read Full Article 194 comments

Friday February 7, 2020 4:22 am PST by Tim Hardwick
Apple has been fined 25 million euros by a French consumer fraud group for intentionally slowing down some iPhone models with a software update. The Directorate General for Competition, Consumption and the Suppression of Fraud (DGCCRF), which is part of the country's economy ministry, concluded that Apple had failed to inform users that iOS updates to older iPhones could slow down their...
Read Full Article 169 comments

Thursday August 1, 2019 9:49 am PDT by Joe Rossignol
A group of 18 individuals have filed a class action lawsuit against Apple this week in a Northern California federal court, accusing the company of "secretly throttling" older iPhones starting in January 2017. The complaint, seen by MacRumors, refers to the iPhone slowdown saga as "one of the largest consumer frauds in history, affecting hundreds of millions of mobile devices across the...
Read Full Article 164 comments

Wednesday May 22, 2019 8:38 am PDT by Joe Rossignol
The UK's competition watchdog today announced that Apple has formally agreed to be "clearer and more upfront with iPhone users" about battery health and performance to ensure compliance with consumer law, as the BBC reports. In a pledge submitted to the Competition and Markets Authority or CMA, Apple committed to several actions it has already taken, including providing consumers with "clear ...
Read Full Article 120 comments

Monday February 11, 2019 6:45 am PST by Joe Rossignol
Last year, the Italian Competition Authority hit Apple with a 10 million euro fine over "dishonest commercial practices" related to an iPhone performance management system it introduced in iOS 10.2.1 without informing customers. The antitrust watchdog said the update was a form of planned obsolescence. As a result of the investigation, Apple has been forced to add a consumer protection...
Read Full Article 74 comments

Apple Replaced 11 Million iPhone Batteries in 2018, Up From 1 to 2 Million

Monday January 14, 2019 10:22 pm PST by Juli Clover
Apple replaced a total of 11 million iPhone batteries under the $29 battery replacement program that was introduced at the end of 2017 and ran through 2018 before ending on December 31, 2018. The tidbit was shared by Tim Cook at a recent all-hands meeting with Apple employees and relayed by Daring Fireball's John Gruber, who heard the information from an unnamed source. Apple replaced...
Read Full Article 260 comments

Wednesday October 24, 2018 6:22 am PDT by Mitchel Broussard
Nearly one year after reports began circling about Apple's throttling of older iPhones with degraded batteries, Italy's antitrust authority is now fining Apple 10 million euros (about $11.5 million USD) for "planned obsolescence" of its smartphones (via The Korea Herald). The fine on Apple follows Italy's investigation into iPhone battery slowdowns that began back in January, and the Italian...
Read Full Article 223 comments

Wednesday September 12, 2018 4:03 pm PDT by Juli Clover
Since the end of 2017, Apple has been offering battery replacements for a discounted price of $29 to appease customers who were upset at device throttling resulting from degraded battery performance. When announcing the new inexpensive battery replacement pricing, Apple promised to offer the discounted price for the entirety of 2018. Now that we're nearing the end of the year, Apple has...
Read Full Article 53 comments

Tuesday July 31, 2018 4:29 pm PDT by Juli Clover
During today's earnings call covering the third fiscal quarter of 2018, Apple CEO Tim Cook was questioned about the health of the smartphone market and the impact the company's choice to offer low-cost battery replacements might have on replacement cycles. In response, Cook said that he believes the smartphone market is "very healthy. "It's the best market to be in for someone in the business...
Read Full Article 91 comments

Thursday July 5, 2018 10:24 am PDT by Joe Rossignol
Class action lawsuits continue to mount against Apple over the iPhone Slowdown saga. For those unaware, late last year, Apple admitted that it throttles the maximum performance of some older iPhone models with chemically aged batteries when necessary in order to prevent the devices from unexpectedly shutting down. Apple views this as a feature intended to provide the best user experience...
Read Full Article 156 comments

Wednesday June 6, 2018 10:36 am PDT by Joe Rossignol
Daring Fireball writer John Gruber sat down with Apple's VP of marketing Greg Joswiak and VP of AR/VR engineering Mike Rockwell at the California Theatre on Tuesday for a live recording of his The Talk Show podcast. MacRumors was in attendance during the interview, which reflected on a wide range of topics, including augmented reality, privacy, the latest software updates, and other...
Read Full Article 403 comments
Newer Posts
Archives
Older Posts