A HomeKit vulnerability in iOS 11.2 that allowed unauthorized access to HomeKit accessories that included smart locks has been fixed by Apple, the company told 9to5Mac in a statement today. 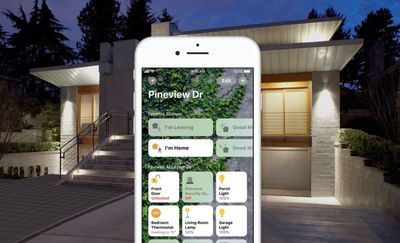 "The issue affecting HomeKit users running iOS 11.2 has been fixed. The fix temporarily disables remote access to shared users, which will be restored in a software update early next week."

To patch the vulnerability, which was reportedly difficult to reproduce, Apple disabled remote access for shared users, something the company says will be reintroduced in a software update that's set to be released early next week.

Apple was able to address the vulnerability server side as it affected the HomeKit framework rather than individual HomeKit products. Though the vulnerability impacted all HomeKit devices, it is of particular interest to HomeKit users with smart locks and other HomeKit-enabled devices that allow access to the home, as someone able to exploit this kind of problem could gain entry to a dwelling without a physical key.

9to5Mac says that Apple was first informed about the security issue and other related HomeKit vulnerabilities in October. Some of the problems were addressed in iOS 11.2 and watchOS 4.2, while the rest were fixed server side. HomeKit setups with at least one connected iPhone or iPad running iOS 11.2 and signed into a HomeKit user's iCloud account were impacted.

Since its launch in 2014, HomeKit has seen many major improvements and its adoption has grown steadily. A wide range of manufacturers have embraced HomeKit, and there are HomeKit lights, outlets, switches, thermostats, window coverings, fans, sensors, cameras, locks, and garage door openers.

August, Friday, Koogeek, Kwikset, Schlage, and Yale all make HomeKit-enabled smart locks that can be controlled via Siri voice commands and HomeKit apps.

Wackery
apple software used to have a reputation
Score: 32 Votes (Like | Disagree)

ideal.dreams
Does Apple even have a quality assurance department at this point? The latest releases of iOS and macOS are downright embarrassing.

We share remote access in our family to access all of our HomeKit smart devices and now we're all unable to control our items until sometime next week. Absolutely ridiculous.
Score: 18 Votes (Like | Disagree)

I do too. He should have stayed at Apple and not got asked to leave. It really does show
Score: 11 Votes (Like | Disagree)

calzon65
Apple's policy to rush out new versions of IOS each year is pathetic. Their quality control is complete garbage and before someone says, well IOS is a complex operating system having to support both current and many legacy devices ... I don't give a damn.

Apple used to stand for quality, but IOS has become a bloated operating system where the hype is always about new emojis. Apple needs to get off the annual release of major IOS versions and concentrate on efficiency and bug fixes.
Score: 11 Votes (Like | Disagree)


Makes me sick!
Score: 10 Votes (Like | Disagree)
Read All Comments