Apple today added banners to the App Store and iTunes Store on Mac and iOS devices as well as its homepage allowing customers to donate to Mercy Corps to support those who have been affected by massive flooding in Kerala, India.

Flooding began in Kerala earlier this summer with the arrival of monsoon rains, and picked up again on August 8 following days of torrential downpour. Approximately 420 people have died since the flooding began, and more than a million are living in relief camps. 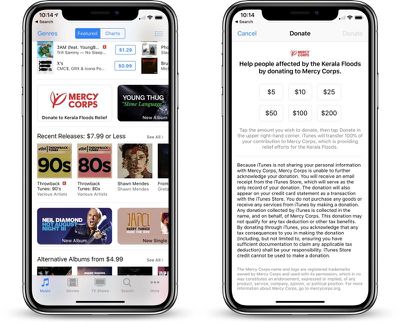 Apple is allowing customers to donate to Mercy Corps using credit and debit cards that are already on file with the iTunes Store and App Store for a no-hassle donation process. Apple customers can donate $5, $10, $25, $50, $100, or $200, 100 percent of which goes to Mercy Corps.

Apple often uses the iTunes Store and App Stores to raise money for charity during major disasters. Apple recently collected money on behalf of the American Red Cross to help fight California wildfires, and Apple has also collected donations for major disasters like the 2015 Nepal earthquake, the 2013 Philippines typhoon, Hurricane Sandy in 2012, the 2011 Japan earthquake and tsunami, and the 2010 earthquake in Haiti.

Mercy Corps is a global humanitarian aid organization that says its mission is to "Alleviate suffering, poverty and oppression by helping people build secure, productive and just communities."

From the period between August 13 to August 20, Kerala received 18.5 inches of rainfall, an above average amount caused by two bands of heavy rain exacerbated by areas of low pressure in the Western Ghats mountain range, according to NASA.


Rain has started to abate this week, allowing rescue and relief operations to deal with the devastation the flooding has caused.

For those who do not want to donate through Mercy Corps and iTunes, there are other options. The government of Kerala is accepting direct money transfers and has set up a website where people can donate using credit and debit cards.

Other relief organizations working in Kerala are also accepting donations, including Oxfam India, Goonj, and Habitat for Humanity India.

PickUrPoison
Apple does much for charity, including direct donations, making it easy for others to donate and 2 for 1 employee gift matching up to $10,000 (and $50 donation per volunteer hour). Tim Cook has personally given over $100 million to various charities, and plans to eventually give away his entire fortune.

But of course each person sees that differently, depending on the mindset through which they view the world and their fellow humans. The question of why Apple’s charity triggers such anger and hatred is probably best left to social pathologists.

Still, it’s disheartening to see the usual Apple hate spewing forth; as usual Apple can do no right. It’s really quite disgusting. Wish the forum software allowed a larger ignore list.
Score: 14 Votes (Like | Disagree)

I’m surprised Apple hasn’t helped Puerto Rico and their catastrophe rather than India but I guess it’s good marketing that they’re trying to “snooze” India to excepting Apple .

One could easily argue that NoCal, with their vast wealth base, doesn't need the help as badly as large sections of India where people could routinely starve to death and die of maladies after a natural disaster in ways that would be inconceivable to hear about in Palo Alto.
Score: 9 Votes (Like | Disagree)

How about nobody does anything at all. Wouldn’t that be a better world.
Score: 5 Votes (Like | Disagree)

serialiphoneuser
Can't they donate a small amount from their profits?
Score: 5 Votes (Like | Disagree)
Read All Comments