Apple today added banners to the App Store and iTunes Store on Mac and iOS devices allowing Apple customers to donate to the American Red Cross to support those who have been affected by the fires that have devastated Northern California.

Impacting Shasta County and the town of Redding, the Carr Fire has become the sixth most destructive fire in California's history, ripping through more than 125,000 acres and destroying or damaging over 1,500 homes and buildings. Other smaller fires, such as the Ferguson Fire near Yosemite National Park, are also raging in California due to the hot, dry weather. 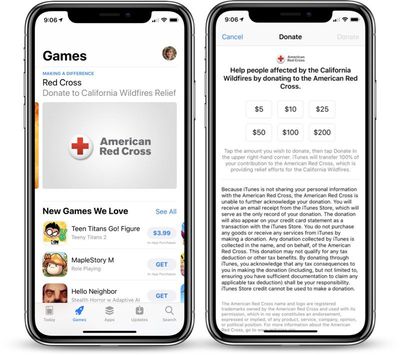 The Carr Fire started on July 23 after a car caught fire on California State Route 299. Six people have been killed, including two firefighters. The fire is 39 percent contained at this point, but high winds expected this weekend could hamper efforts to put it out.

Apple is allowing its customers to donate using credit and debit cards that are already on file with the iTunes and App Stores, for a simple, no-hassle donation process. iTunes and App Store users can donate $5, $10, $25, $50, $100, or $200, 100 percent of which goes to the American Red Cross.

Apple often uses the iTunes Store and App Stores to raise money for charity during major disasters. Apple collected donations on behalf of the American Red Cross during the 2015 Nepal earthquake, the 2013 Philippines typhoon, Hurricane Sandy in 2012, the 2011 Japan earthquake and tsunami, and the 2010 earthquake in Haiti.

Fire season in California typically lasts through the late summer and well into October, with scorching temperatures, dry weather, and high winds reacting with dry brush caused by drought. This July, areas in Northern California have seen unusually high temperatures leading to an early start to fire season.

EvilEvil
The Red Cross is a scam. Donate to charities that actually give 100% aid to the people that need it.
Score: 19 Votes (Like | Disagree)

That’s equivalent of a guy making $50K a year throwing in a nickel.
Score: 14 Votes (Like | Disagree)

Am I a jerk for wondering why people would live in a home smack in the middle of millions of trees in one of the hottest, driest areas in the country?

It hasn't been this bad for a long time... I have lived in California since 1989. There has been a pretty severe drought here in the last decade that has hit the place REALLY hard.

Even the place I'm renting right now in the high desert, if you go to Google Maps, you see trees, grass, bushes... in the street view. Now? I have dirt in my front yard, dirt in my backyard - everything has died in the last 10 years.

CA has worked hard to require places to create a safe zone around their houses but there always seems to be idiots who love starting fires (getting worse) every year. Thanks to the drought, it's ... really bad here.

We're all fined if we use a lot of water too. So I have a bucket in the shower to flush the toilet to help with the water shortage that we've been having here for the last year+.

Just an FYI for those who aren't a native Californian. :p
Score: 14 Votes (Like | Disagree)

Why give the tax deduction to Apple?

Apple does not get a tax deduction for this, you do if you donate.
Score: 10 Votes (Like | Disagree)

autrefois
Can MacRumors stop blindly posting the iTunes Red Cross information each time there’s a disaster and include at least a brief note recognizing there are other alternatives for people who want to help?

Whenever Apple does the Red Cross PR thing, a large number of the comments (correctly) focus on the fact that the Red Cross gives comparatively little to actual disaster relief compared to other charities, including local ones who often know better where the money is needed.

No MacRumors isn’t required to help, and neither is Apple. But it would be nice to do the right thing so that the people whose lives are affected can get the help they need.
Score: 8 Votes (Like | Disagree)

HacKage
If there is a foundation that I'm going to be donating money to, you can bet the Red Cross are at the very bottom of the list!
Score: 7 Votes (Like | Disagree)
Read All Comments