Wednesday October 31, 2012 10:36 pm PDT by Eric Slivka
Apple has launched a new page on its iTunes Store allowing users to easily donate money to the American Red Cross toward Superstorm Sandy relief efforts. The donation page, which is accessible through the desktop iTunes Store as well as the iTunes and App Store apps on iOS, permits donations at the $5, $10, $25, $50, $100, and $200 levels. 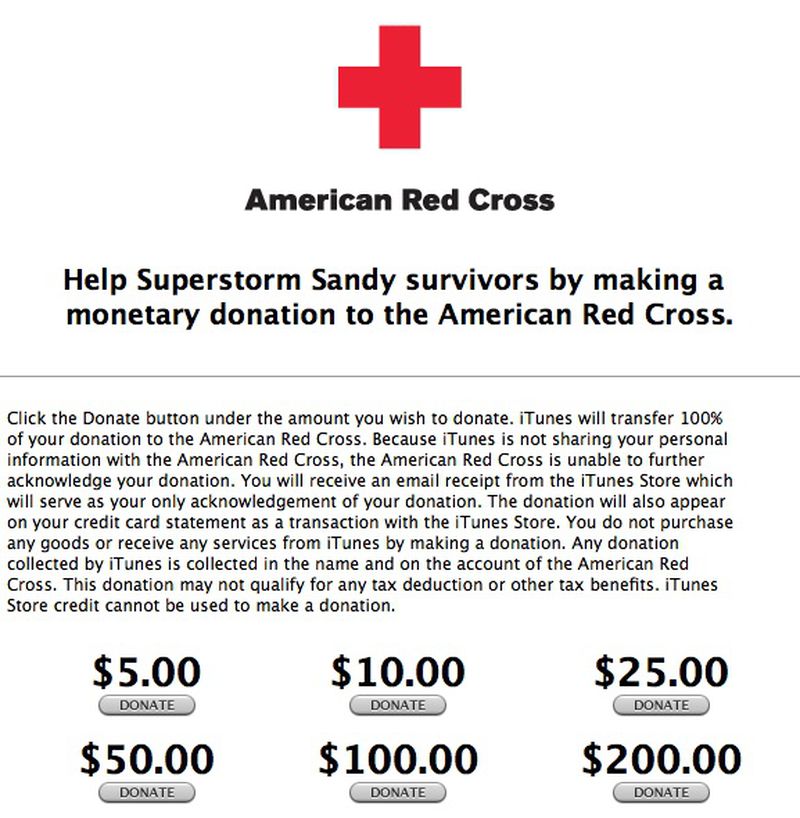 Apple will transfer 100% of each donation directly to the American Red Cross, allowing users to have their donations seamlessly billed to their existing iTunes Store accounts. With Apple currently holding over 400 million iTunes Store accounts with credit cards attached, the company has a very significant customer base that can take advantage of the donation program.

Apple has conducted several similar campaigns in the past, most recently in March 2011 following the Japanese earthquake and tsunami and in January 2010 following the Haitian earthquakes.

Update: Apple has now added a link to the iTunes Store donation page on the main apple.com page.

MultiMediaWill
The awkward moment when Apple has billions of liquid dollars and will not donate anything. Hypocrisy at its finest.
Rating: 33 Votes

It's almost as if they're a publicly traded company with the sole purpose of making money for the shareholders! Those heartless bastards. :rolleyes:
Rating: 30 Votes


iTunes store gets more eyeballs than the Red Cross site. Also Apple already has a lot of credit card details on their servers. One click is all it takes.
Rating: 25 Votes


And how would you know?
Rating: 15 Votes

Allowing the Red Cross seemless access to their entire customer base is pretty generous I'd say. If you or a loved one had an illness that you could not afford to get treatment for, and Apple allows you to receive donations like this from their customer base, would you say...

"no Thanks Apple, if your customers want to donate, they can come to me directly!"

No, I didn't think so either. Think before posting.


How is it generous of Apple allowing you to donate your own money? It's convenient, but not generous.


As if I'd post what I do here. I'm like Steve. I give secretly. You should be defending me.
Rating: 13 Votes

I love it when Apple does this. If I mailed a check to the Red Cross, my name would be get on a list and they'd spend at least 1/2 of what I sent them begging for more. They still may piss away 1/2 the money on begging campaigns, but at least they won't be filling my mail box with their crap.

So Thanks Apple, for letting me donate in a secure and anonymous manner and still have confidence that the money will actually make it to the Red Cross.
Rating: 11 Votes

GREEN4U
If I donate, I want to know where my money's going. For example, a rural family who lost their home would be great. But I wouldn't want my money going to some rich Manhattan-ite whose Porsche was flooded in their $600/month underground parking space. For that reason, I'm not donating. I'll wait for the next disaster. Sorry East Coasters!
Rating: 9 Votes