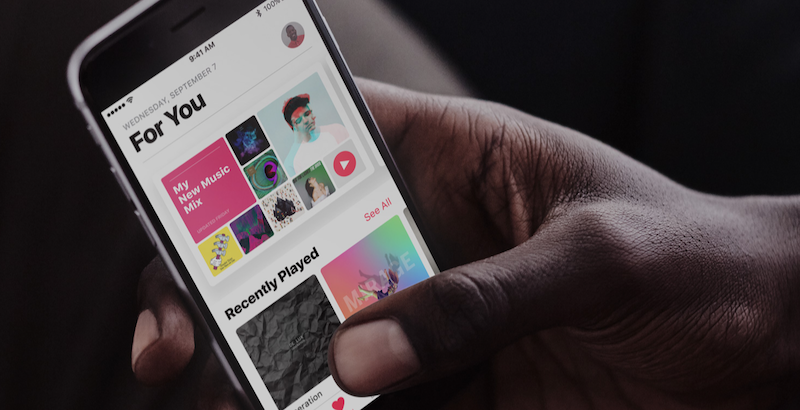 "It's been quite a year," says Cue. "We were thrilled to see that we could take [artists'] passions and drive them all the way to No. 1. Chance the Rapper, who we put on Apple Music exclusively, hit the top 10 on the Billboard charts [based on streams alone], and I can't recall that being done before."

While Apple has traditionally aligned itself with rock acts like U2, Cue says the company has long wanted to give hip hop more exposure. The company has felt that hip hop was underrepresented in both iTunes and streaming charts, which is why the company has focused on hip hop acts more recently.

Apple's biggest competition in the streaming music space remains Spotify, which had 40 million subscribers in September, but the service continues to struggle as it attempts to become profitable. In August, it was reported the service was punishing artists who offered Apple Music exclusives. Spotify denied the claim.

Rogifan
I would love to know where hip hop is underrepresented. Every time I tune into Beats 1 that's all they're playing.
Rating: 7 Votes

TMRJIJ
I am a happy subscriber though I wish they would return the Apple Music UI back to iOS 9/El Capitan style. The Big Bold Text is stupid and takes more work to get to certain controls.
Rating: 4 Votes

You're not crazy. More and more people are turning away from streaming music. http://time.com/money/4056464/vinyl-records-sales-streaming-revenues/


Vinyl sales declined this year, after years of growth, while streaming is on a tear.
Rating: 3 Votes

T-Mobile offering in he USA and Videotron offering in Canada where music streaming (not just Apple Music, but other apps also) doesn't count against your regular data usage is against net neutrality I suppose?


Against the principle, yes. Whether it is against actual regulations in the US and Canada, I do not know. I do suppose that T-Mobile needs to white-list certain IP addresses or analyse packets to differentiate them. Practically, T-Mobile won’t be able to white-list every possible provider, so they are making the selection for you, as they are favouring certain classes of media as well.

I hate when I read comments like this. If it's something that's going to benefit the consumer then why not?


It is only going to benefit certain consumers, specifically those that stream music and listen to T-Mobile’s white-listed providers. Not other types of media, not other providers. Who pays for the additional bandwidth, you think? On top of that, there are larger issues to this, so the situation is not an unequivocal benefit to ‘the consumer’.
Rating: 3 Votes

You're not crazy. More and more people are turning away from streaming music. http://time.com/money/4056464/vinyl-records-sales-streaming-revenues/


There might be more interest in records than in the past, but you have to be real... the streaming music is only growing far faster than any sort of reactionary return to physical media.
Rating: 2 Votes

CaryMacGuy
I love Apple Music...since subscribing, I have discovered all kinds of great music that I wouldn't have otherwise. The curated playlists that appear in the For You tab solve the "what do I want to listen to today?" dilemma. Also having access to gobs and gobs of music is amazing. Yesterday I created a Rolling Stones from Start to Finish playlist and was able to add every one of their 25 albums to play consecutively. My wife who is not typically impressed by new technology LOVES Apple Music because it always has what she is looking for.
Rating: 2 Votes

Sorry Eddy but "free-bees" and spamming people to sign up for three months of rap & hip-hop along with vastly inferior music curation doesn't equate to a being "Quite a year".

Honestly, everything else aside, the terrible music curation is what keeps me away from Apple Music. I don't know why it's so awful. Sometimes it'll even play a random song that is completely out of place in the category of music being played ... like listening to a death metal station and a slow jazz song comes on, lol. I don't have this issue with other streaming services.
Rating: 1 Votes
[ Read All Comments ]