Apple Prepping to Launch New iPhone Incentive Programs, Has an 'Army' of Products in the Works 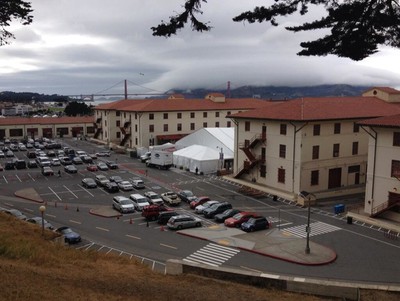 A photo taken of the Fort Mason meeting, via Noble Brown.
During the meeting, CEO Tim Cook noted 80% of iPhones are sold at third party locations, a figure that he would like to improve in the future with new iPhone promotional tactics.

The iPhone is Apple's central "gateway product" to other devices like iPads and Macs, so it is critical that the Apple smartphone is sold via an Apple Store so new customers are immediately exposed to iPads, Macs and other devices on the showroom floor. Even though 80% of iPhones are not sold at Apple Stores, 50% of all serviced iPhones are troubleshooted, repaired, or replaced at Apple Store Genius Bars. Cook reportedly hinted that he would like those numbers to be more in line.

Apple is planning to boost iPhone sales with various incentive programs, including the recently launched Back to School promotion that includes the iPhone for the first time and an upcoming in-store trade-in program. The company may also extend its price matching policies, which debuted in the U.S. last summer, internationally.

Along with new iPhone discount and sales strategies, Apple also plans to heavily market iOS 7 when it is released in the fall and introduce new retail locations in Europe.

According to store leaders who were at the summit, Apple has an "army of new products" in the works, which may include the upcoming iPhone 5S, a redesigned fifth generation iPad, a low cost iPhone, and a refreshed line of MacBook Pros, among other products.

As a former Apple employee, I'll say this:

While Cook's vision is of making Apple Retail a destination for consumers, the numbers they show here indicates that it serves only as a destination for service and support. Until Apple can find a way to raise the standard of Retail and make it a uniformly pleasant experience for customers (by increasing hiring standards for the employees and raising compensation to draw desirable candidates), the stores will continue to be only visited out of necessity. Apple Retail has come a long way since it started, but has in the past five years since iOS was released, they have shown that they still have plenty to learn.

My experience has been entirely the opposite. At least when it comes to iPhones, I much rather deal with somebody at an Apple Store versus a carrier or big box retailer.

That said, I imagined this dissonance was mostly a matter of convenience: my carrier has locations everywhere but there's only one Apple store. Doesn't really matter where I get the phone, so why not choose the easiest solution possible. For repairs, I know I'm going to have a much quicker and smoother experience going directly to Apple, so I'm willing to go out of my way.
Score: 27 Votes (Like | Disagree)

hexonxonx
My join date on this site was purely due to having bought the original iPhone. Five days later, I was the owner of a 15"MBP all because of that iPhone.
Score: 13 Votes (Like | Disagree)

As a former Apple employee, I'll say this:

While Cook's vision is of making Apple Retail a destination for consumers, the numbers they show here indicates that it serves only as a destination for service and support. Until Apple can find a way to raise the standard of Retail and make it a uniformly pleasant experience for customers (by increasing hiring standards for the employees and raising compensation to draw desirable candidates), the stores will continue to be only visited out of necessity. Apple Retail has come a long way since it started, but has in the past five years since iOS was released, they have shown that they still have plenty to learn.


Perhaps I'm alone in this sentiment but I've always found Apple Stores to be welcoming, friendly, and helpful. Plus it gives me a chance to try out products I could never hope to afford; so it's definitely not out of necessity!

However as you're a former Apple employee I have no doubt you know a lot more about what goes on behind the scenes. It would be extremely rude and unprofessional for me to ask you about 'horror' stories you had when working for Apple

but I'll ask you anyway :D Any chance of giving these humble MR members an insight about some of the goings-on? :o
Score: 12 Votes (Like | Disagree)

Four oF NINE
Apple needs to accelerate store openings in small cities that are outside a two hour drive of other Apple retail stores.
Score: 7 Votes (Like | Disagree)

InTheMist
I started out by telling a friend's kid to shut up about it or show me that silly Apple toy (iPod Touch).

Three days later I had an iPhone. Three months later, my first Mac. First customer in Europe to have an iPad, then iPad 2, later 4, three years later another Mac and iPhone 5, just to round out the circle of addition.

lolkthxbai
80%? That's not surprising considering most people buy their phone from their carrier, not the manufacturer.
Score: 6 Votes (Like | Disagree)
Read All Comments