The newest version of the operating system that runs on the fourth and fifth-generation Apple TV. 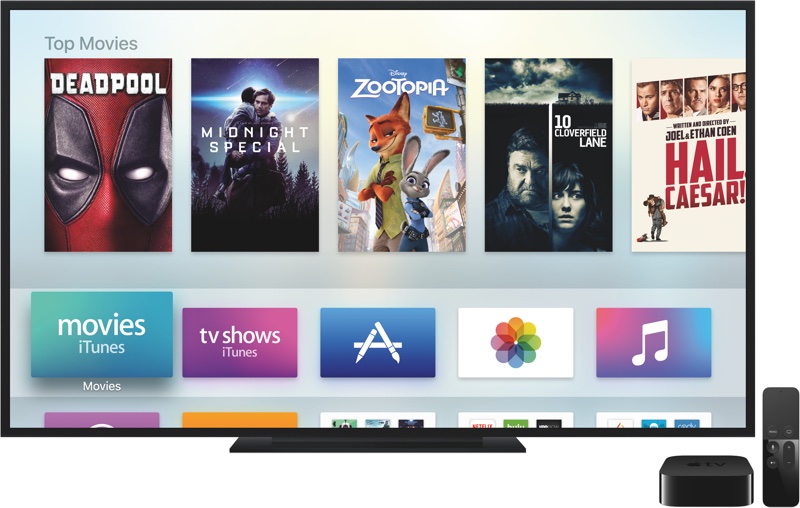 The fourth- and fifth-generation Apple TVs run an operating system called tvOS, which was built from the ground up to provide a simple, easy-to-navigate television watching experience. tvOS is designed to put content front and center, with a familiar app-centric design that's controlled through the touch-based remote and Siri voice commands.

tvOS features a full App Store for downloading a range of different apps and games that can be used on the Apple TV, along with several built-in apps, much like iOS. Built-in apps include Photos for accessing your Photo Library on the Apple TV, Apple Music, Podcasts, Computers for Home Sharing, and TV, an app that aggregates TV and movie content from a wide range of apps.

Siri integration is a key part of tvOS, allowing users to search for specific content via voice for quicker content access, and there are useful features to make television watching simpler, like single sign-on or zero sign-on for more quickly signing into third-party apps that require authentication with your cable credentials.

Apple adds new features and introduces new versions of tvOS on a regular basis, but tvOS updates have historically been smaller in scale than updates for iOS, macOS, and watchOS. Since its 2015 debut, tvOS has seen few changes to its overall design and layout, but a few new features have launched.

tvOS 12, the latest version of tvOS, was released in September 2018. tvOS 12 introduces support for Dolby Atmos sound, with Apple pledging to offer the largest collection of Dolby Atmos-supported movies in the fall.

A new zero sign-on feature simplifies the cable authentication process by allowing the Apple TV to detect a user's network and automatically sign them into apps they receive access to through a cable subscription.

New aerial screensavers created in partnership with the International Space Station have been added, and existing screensavers now include location information to let you know where they were shot.

The current version of tvOS 12 is tvOS 12.4.1, a minor update that was released on August 26. tvOS 12.4.1 focuses on under-the-hood bug fixes and performance updates rather than major outward facing changes.

Apple in June unveiled the next-generation version of tvOS, tvOS 13, which is now available for developers. tvOS 13 brings a new Home screen, multi-user support, a Control Center, support for Xbox and PlayStation 4 controllers, and new ocean-themed screensavers. tvOS 13 will be released in September and will replace tvOS 12.

tvOS 12 introduces support for Dolby Atmos, one of the most wished-for features for the Apple TV 4K. When tvOS 12 launches in the fall, Apple says iTunes will be home to the largest collection of Dolby Atmos-supported videos anywhere.

Apple plans to upgrade all eligible titles with Dolby Atmos, so movies you've already purchased will be upgraded at no cost, just like when Apple introduced 4K movies to iTunes.

With the addition of Dolby Atmos support, Apple TV 4K will be the only streaming media player that offers both Dolby Atmos and Dolby Vision, for the highest-quality cinematic experience.

For customers who get their internet access and cable subscription from the same company, there's a new zero sign-on feature that Apple has implemented in tvOS 12. With zero sign-on, the Apple TV automatically detects a user's broadband network and can sign them into all of the supported apps they receive through their subscription, with no typing required.

Zero sign-on is available to Charter Communications customers, and will expand to other providers in the future.

For tvOS 12, Apple collaborated with the International Space Station National Lab and the Center for the Advancement of Science in Space to create new aerial screensavers shot from space by NASA scientists.

All aerial screensavers are also more interactive in tvOS 12, allowing viewers to see location information and swipe between aerial shots.

Apple in iOS 12.3 and tvOS 12.3 overhauled the TV app, introducing a cleaner, more streamlined look for the app along with better content recommendation algorithms.

The overall app interface has been improved with sections for Movies, TV Shows, Sports, and Kids content at the top on both Apple TV and iPhone, while Library houses a list of content that you've purchased from iTunes.

"Watch Now" with its "Up Next" function is still front and center in the TV app, but there's a new machine learning-based recommendation engine that surfaces personalized content suggestions for you based on what you like to watch.

Up Next will continue to keep track of what you're watching so you'll never forget what episode of a TV show you're on or where you left off watching a movie, while the new "For You" recommendation feature draws in content from more than 150 streaming apps, including Hulu, Amazon Prime, DirecTV Now, PlayStation Vue, and more. In addition to the "For You" section, the TV app also offers "Because you watched..." recommendations much like Netflix.

The TV app includes a new "Channels" section, which is a key new services feature that Apple added with the revamp. Channels are subscription services that you can sign up for and watch within the TV app without having to open up another app.

So, for example, if you come across a show you want to watch on your iPhone or Apple TV that's on Showtime, you can tap to subscribe to Showtime right in the TV app, and then you can watch that show without leaving the app.

Some of the new Channels that are supported include CBS All Access, Starz, Showtime, HBO, Nickelodeon, Mubi, The History Channel Vault, and Comedy Central Now. During the beta, though, users can subscribe to Showtime, Starz, Smithsonian, and Tastemade.

You'll still get recommendations for content from services that aren't a part of Channels, so while Hulu isn't something you can subscribe to and watch in the TV app itself (you need to watch Hulu content in the Hulu app), you can still see Hulu content suggestions just like the original TV app.

The TV app is available on iPhones, iPads, and the Apple TV at the current time, but in the summer, Apple is expanding it to the Mac. Apple is also bringing the Apple TV app to Roku, Amazon Fire TV, and several smart TV offerings from companies that include Samsung, Sony, LG, and Vizio.

Apple TV+ is Apple's new streaming television service, coming this fall. Apple TV+ will offer all of Apple's original TV shows and movies that are in development.

Little is known about Apple TV+ this time, but it will be available on all devices where the TV app is available when it launches. Apple has not yet announced pricing for the service, but it is ad free and shows will be available to watch on demand.

For more information on Apple TV+, make sure to check out our Apple TV+ guide.

Apple has more than two dozen original television shows and movies in the works, many with high-profile actors, actresses, directors, and producers. We have a full guide with a list of all of the TV and movie projects Apple has in development available here.

Siri on the Apple TV is activated by pressing the dedicated Siri button on the Siri Remote and then speaking a command. Siri can respond to a huge range of requests on the Apple TV, doing everything from offering up movie recommendations to revealing the actors in a television show.

As on iOS, Siri can open apps and games and respond to commands that are more than simple content searches. For example, Siri can display sports scores, movie times, weather, and stock status. Siri can also be used to change specific settings with commands like "Turn on Enhanced Speech," a feature that boosts dialogue and softens music and sound effects, or "Turn on closed captioning" for subtitles.

A Siri feature called Live Tune-In lets Siri open up live TV content in apps with commands like "Watch ESPN" or "Watch CBS," and Siri can also find content within apps. For example, "find me YouTube videos with kittens" launches the YouTube app and show the relevant search results, as does a command like "find me comedies on Netflix."

Siri also works alongside a systemwide search feature in tvOS that allows searches to bring up content from multiple apps like Netflix, iTunes, Hulu, HBO Go, Showtime, and more. So if you search for something like "Harry Potter," all of the various apps where you can watch a Harry Potter movie will come up. A list of apps that support systemwide search can be found in an Apple Support document.

One of the neatest Siri perks is a feature that replays content. During a TV show or movie, ask Siri "What did he just say?" or a similar command and Siri rewinds 15 seconds and temporarily turns on captions. Rewinding and fast forwarding can also be done with voice commands like "Fast-forward five minutes," or "Play from the beginning."

Siri displays information on the cast in a movie or television show when queried. Asking questions like "Who directed this movie?" or "Who stars in this movie?" brings up a list of the cast. Siri can filter based on cast, director, date, or age rating.

With commands that bring up extra content, like behind-the-scenes information, sports scores, or weather, the information is displayed at the bottom of the Apple TV interface so it does not interrupt the show or movie that's on the screen. Tapping on the remote opens the bottom bar full screen, pausing the television show or movie that's playing, and it's simple to switch between tasks with a swipe of the remote.

The Apple TV, like the iPad, can serve as a home hub that connects to your HomeKit products and allows them to be accessed remotely when you are away from home. For remote access to HomeKit devices, an Apple TV or an iPad is a requirement. Otherwise, HomeKit products only work when you're connected to the same Wi-Fi network.

More on the Apple TV

For full details on the fourth- and fifth-generation Apple TV models, make sure to check out our dedicated Apple TV roundup. It includes details on the Apple TV hardware and it has a section on Apple's efforts to build out its original content offerings.