Apple's AirPods Max were announced two years ago today, marking the company's first push into the high-end over-ear headphones market under its own brand name. 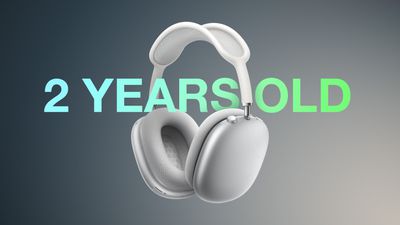 Rumors about Apple's work on a pair of high-end headphones, at the time believed to be called the "AirPods Studio," heated up throughout 2020. They were announced abruptly via an unexpected press release on December 8, 2020 and went on sale the same day. Orders started arriving to customers one week later on Tuesday, December 15.

The ‌AirPods Max‌ offer many popular AirPods features such as the H1 chip, easy pairing, Active Noise Cancellation, Transparency, automatic switching, Spatial Audio with dynamic head tracking, but in a premium over-ear design for the first time. They also offer a headband made of a flexible mesh canopy, replaceable magnetic earcups, a Digital Crown for volume control, a button for switching between ANC and Transparency, and a Smart Case for storage and to put the headphones into a low power state.

Demand for the ‌AirPods Max‌ was high immediately after launch, with shipping estimates that stretched out several months. Initial reviews of AirPods Max were favorable, applauding the headphones for being "more than enough to compete with other high-end headphones." While the recommended retail price remains at $549, the ‌AirPods Max‌ are often available with discounts up to around $100.

The ‌AirPods Max‌ have also been subject to criticism since their launch, including for their price relative to rival sets of high-end over-ear headphones, the design of the Smart Case, condensation inside the earcups, poor battery life (something that was later fixed via a software update), and, most recently, ANC strength being reduced over time.

While the ‌AirPods Max‌ are now two years old, there is no sign of a new model despite a growing number of upgrades and features that could come to the headphones. In May 2021, Bloomberg's Mark Gurman said that Apple was not actively working on second-generation AirPods Max, and talk of a color options refresh for the device seems to have diminished. The most recent mention of a second-generation model was Gurman's claim in October that the next version of ‌AirPods Max‌ will feature USB-C and launch "by 2024."

ridgero
By far my favorite headphones!
Score: 14 Votes (Like | Disagree)

jmho
Mine that I bought on day 1 just died. Good to know they're under 2 years old.
Score: 7 Votes (Like | Disagree)

Man that sucks big time. They really should sell the band separately as from videos you can remove the band with a sim tool.

Fully agree. While I have the SG ones, the mesh is aging. It's ok really, these headphones are on my head hours every day, so that they wear is fully appreciated. But in all fairness there should be spare headbands to be bought from Apple. I have yet to replace the cushions that they have for sale, no need for that, they are still in great condition. So why not the other soft part?

I hope that Apple will start offering headband replacements for a reasonable (lol) cost, because right now it is a €300++ cost to replace the entire headphone if you approach the Apple Store with this problem. And that is of course just plain silly.
Score: 6 Votes (Like | Disagree)

JokoWidodo
i hope the next update will bring a power button
Score: 5 Votes (Like | Disagree)