Apple on Tuesday released new 3C39 firmware for the AirPods Max, and there was speculation that the new software was meant to address a battery life problem that users had been experiencing. Some ‌AirPods Max‌ headphones were seeing excessive battery drain while in the Smart Case, and now there's evidence that the update does indeed fix the problem. 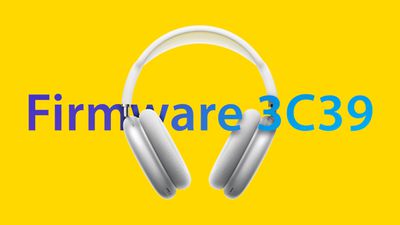 AirPods Max battery usage in the Smart Case before and after the latest firmware update. I think they’ve fixed it. pic.twitter.com/upFLBw85Oq — Guilherme Rambo (@_inside) March 12, 2021

In addition to Rambo's testing, there are also anecdotal reports on the MacRumors forums that suggest the ‌AirPods Max‌ are no longer losing large amounts of battery life in the case overnight. From MacRumors reader F23:

Updated yesterday. 24 hours later, they did NOT lose a single percent. Still at 97% after 24 hours in the case. On previous software version i would lose 10%+ overnight consistently.

Other MacRumors readers have noted improvements to automatic switching when using the ‌AirPods Max‌, and a fix for a bug that could sometimes cause them to disconnect between devices. From MacRumors reader TechKris:

I can report a 6% battery drop with the new FW after about 8h overnight placed in the case. Automatic switching between M1 MacBook Air and iPhone seems to be much better now. It was unusable before and just had in manual on the Mac.

There's no clear cut way to update firmware for the ‌AirPods Max‌ like there is for devices like the iPhone, but connecting the ‌AirPods Max‌ to a power source and then listening to music for a few seconds to connect them to an ‌iPhone‌ or iPad typically forces the update.

Have you noticed better battery life since upgrading to the 3C39 firmware? Let us know in the comments.

It's really too bad you can't simply turn them off when not in use.

Apple should invent a power control device using some form of toggle.

It'd take some serious courage to create something so innovative.
Score: 15 Votes (Like | Disagree)

It's really too bad you can't simply turn them off when not in use.

While there have been issues with the power management occurring for some people, I really haven't had any issue with the lack of power button: nothing has been more delightful than just putting them on and setting them down without having to worry about whether I am "done" with them or not.
Score: 10 Votes (Like | Disagree)

EvilEvil
It's really too bad you can't simply turn them off when not in use.
Score: 8 Votes (Like | Disagree)

Do you own a pair?
I don't yet (they're ordered), but I don't see a reason I would want that from what I've read or seen from my the pair my partner has.

It’s initially a bit odd, when you’ve been used to decades of wireless cans having a power button. But you get used to the idea quickly, it’s nice just being able to plonk them on your head and have them instantly connect to whatever device is playing music/film/whatever.

I’ve got to the point where I wish all of my wireless cans worked that way. It’s more like having a good old wired pair (without having to connect them of course).

I know people have, and will, complain about the battery life. But I’ve yet to see the problem.

I’m on day 3 since I last fully charged them, I’ve gone through god knows how many hours of listening and since that last full charge, they haven’t been back in the case. When I’ve finished with them, they get placed on the coffee table, or bedside table until the next day.

Right now, they’re at 62% battery. Which for the amount of listening I’ve done and them not going near the case, is pretty damn good in my opinion. Power switch? An archaic notion, vive la revolution :D
Score: 7 Votes (Like | Disagree)

Somebody give me three reasons why I should get AirPods Max?

Apple should invent a power control device using some form of toggle.

It'd take some serious courage to create something so innovative.

They shut off when the magnets in the Smart Case get near the Hall effect sensor in the Maxs.

I wonder how long before somebody sells a magnet as a "wireless" off switch.

Tuesday June 8, 2021 11:10 am PDT by Juli Clover
Apple today released new 3E756 firmware designed for the AirPods Max, marking the third firmware update Apple has introduced for its high-end headphones since their December launch. The new 3E756 firmware replaces the 3C39 firmware that was released to AirPods Max owners in March. Apple does not provide details on what's included in new firmware updates, so we don't know what bug fixes or ...
Read Full Article • 119 comments

Thursday June 10, 2021 10:12 am PDT by Mitchel Broussard
Today we're tracking the first $50 discount on Apple's AirPods Max headphones. You can get the Sky Blue AirPods Max for $499.00 on Amazon, B&H Photo, and Adorama, down from $549.00. Sky Blue is the only color at this price. Note: MacRumors is an affiliate partner with Adorama. When you click a link and make a purchase, we may receive a small payment, which helps us keep the site running....
Read Full Article • 89 comments