A new Apple TV model with significantly improved performance and more memory is ebbing closer to launch, according to Bloomberg's Mark Gurman. 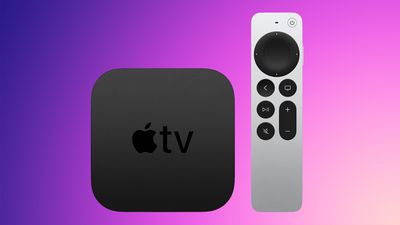 In his latest newsletter, Gurman said that new 11-inch and 12.9-inch iPad Pro, 14-inch and 16-inch MacBook Pro, and Mac mini models with M2 series chips are "highly likely to launch" before the end of 2022. He added that an updated ‌Apple TV‌ model was "getting closer and could potentially launch this year," indicating that it could appear alongside the other new devices released this month.

The new Apple TV, code-named J255, is in development with an A14 chip and an additional gigabyte of RAM. That compares with the A12 chip announced as part of the 2021 Apple TV last year and could be useful for additional gaming capabilities rolling out in tvOS 16.

The A14 Bionic chip debuted in the iPad Air and the iPhone 12 lineup in 2020, and was Apple's first chip fabricated with a 5nm process – enabling significantly improved performance and efficiency. Bringing this chip to the ‌Apple TV‌ alongside more memory is likely to unlock unprecedented levels of performance on the device, particularly when gaming.

In a beta version of iOS 16, code-level references to what appears to be a new and unreleased version of the Siri Remote for the ‌Apple TV‌ were discovered, which could hint that a new remote is on the way alongside the new ‌Apple TV‌.

Apple analyst Ming-Chi Kuo believes that Apple plans to launch a lower-priced Apple TV in the second half of 2022. It is unclear if this refers to the same A14-based ‌Apple TV‌ that Gurman reported, or if it would be an entirely different model.

The current model, the second-generation ‌Apple TV‌ 4K, was the first new ‌Apple TV‌ generation in over three and a half years when it was released in April 2021, with key new features including a redesigned Siri Remote, the A12 Bionic chip, HDMI 2.1, and Wi-Fi 6. It is not yet clear what other features a new model could offer beyond better performance, but in the long term Apple is believed to be rethinking its TV product line and working on a combined Apple TV and HomePod device.