Apple's second-generation redesigned Siri Remote features a touch-sensitive clickpad that can be used to navigate menus as well as fast-forward and rewind video. 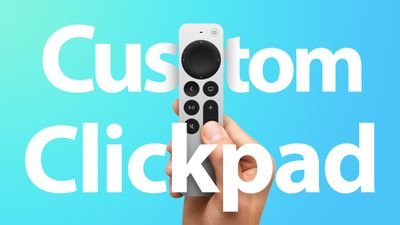 When you first start using the ‌Siri‌ Remote, touch surface tracking is on by default, but if you can't get on with the sensitivity or you're just not comfortable using touch controls on a remote, you can always customize it or turn it off.

If you're having trouble scrubbing through video when playback is paused, check our mini guide to make sure you're using the correct clickpad gesture.

mikeyteh
This thread will be full of complaints by people who don’t have the remote, just like the last remote article. I have 3 new ones and they are a huge improvement from the first Siri Remote and work very well. The scrubber feature is fantastic
Score: 3 Votes (Like | Disagree)

I honestly thought Mac Rumors is/was frequented by readers who are tech savvy.

But after reading complaints on this remote like “can’t skip forward 10 seconds”, when the the new action to do that function seems like the obvious action (click the right arrow); I now feel like it’s just the general public in here. Lol

Yeah, try that in the YouTube app and tell us how well it works. But keep patting yourself on the back for being smarter than everyone else.

(YouTube seems to have swapped out their “smart tv” codebase for their “game console” codebase - it gains a few other features but loses the skip forward/back 10 seconds ability - clicking the left/right arrows will pause the video and move the cursor, and leave it sitting there with the video paused, not at all what someone used to the old function wants. The “skip forward/back 10 seconds while the video continues to run” feature seems to be heavily dependent on the underlying software.)
Score: 2 Votes (Like | Disagree)

I felt comfortable using it in about a minute. Just a matter of summoning some curiosity.

Still not used to the Mic button being on the side. But that's mice nuts and have pretty much adapted.

Overall it's a huge improvement.
Score: 2 Votes (Like | Disagree)

Lounge vibes 05
My only complaint with the new remote is just simply that the mute button and play/pause button should be swapped.
That’s it though, everything else is perfect.
I mean, except for the obvious, no find my integration
Score: 1 Votes (Like | Disagree)

Until reading previous posts about people losing and not knowing how to use remotes, I thought the remote(as in any remote) was one of the simplest items out there that most can understand relatively easily, and wow was I wrong.

I just got the new Apple TV yesterday and the scrubbing feature was exactly as easy as I expected any remote to be, but maybe that is not the case for everyone.
Score: 1 Votes (Like | Disagree)

It’s a good remote, but it continually bugs me that the pause and mute buttons are in their current locations instead of swapped - mute is on the corner of the array in the spot that’s easier to get to without looking, but the ATV is fundamentally a streaming box, and the majority of streaming is on-demand, not live. Generally, no one wants to hurriedly mute a movie while letting it run, they want to pause the movie. Without looking, the pause button requires sliding your finger over the button above it or below it to get to the right place, while the mite button is immediately locatable by sliding your finger up from the bottom, which is a shame. They’ve made the more useful button harder to get to, and the less useful button easier to get to. Oh well, it’s still a good remote.

I would honestly like the play/pause button to be above the volume, the home/tv button to be top left, back button below it, and mute where it is.

I see it similar to how you do that most people pause instead of mute, and when watching stuff I’m really only going to use volume up/down and play/pause during viewing and prefer them stacked so they are near.

I feel the home/tv and back buttons are similar enough to be next to each other and then the mute button to me is fine where it is, mainly because I wont use it much and it’s next to the volume down button, resulting in basically what you are going for if you happen to hit the wrong button.

This is a lot of thought I’ve put into a remote with hardly any buttons lol and I’ll memorize them in the next day or so and never think about it again, but that’s how I would have preferred the remote setup.
Score: 1 Votes (Like | Disagree)
Read All Comments