Apple's upcoming iPhone 14 models are expected to feature the same A15 Bionic chip as last year's iPhone 13 models, according to multiple reports from reliable sources. 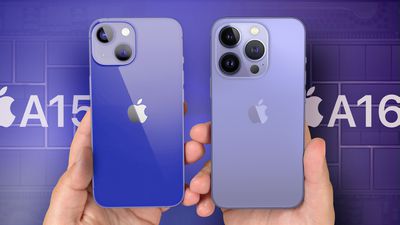 In March, Apple analyst Ming-Chi Kuo claimed that only the iPhone 14 Pro models will feature the A16 chip, with the standard ‌iPhone 14‌ and ‌iPhone 14‌ Max models to be equipped with the A15 Bionic chip just like the ‌iPhone 13‌. In an April edition of his newsletter, Bloomberg's Mark Gurman agreed that standard ‌iPhone 14‌ models are "likely to stick to the A15 from last year or a variant of it." The rumor has since been echoed by other sources like Taiwanese research firm TrendForce.

This differs from Apple's strategy to date of equipping all of the latest iPhones with the same chip. For example, the ‌iPhone 13‌ mini, ‌iPhone 13‌, iPhone 13 Pro, and ‌iPhone 13 Pro‌ Max all contain the A15 chip.

The standard ‌iPhone 14‌ models could still have slightly better performance than the ‌iPhone 13‌, even though they will contain the same A15 chip, according to the leaker known as "ShrimpApplePro." Despite retaining "some old hardware," the non-Pro ‌iPhone 14‌ models will "still have some overall performance boost over the ‌iPhone 13‌ series," due to a new cellular modem and a new internal design, among other changes.

Earlier this year, Gurman said that "beyond trying to make the Pro stand out," ongoing chip shortages may have contributed to Apple's decision to limit its upcoming chip to the iPhone 14 Pro models.

Only the Pro Models in iPhone 14 Lineup Will Feature Upgraded A16 Chip, Another Report Says

Wednesday June 1, 2022 8:24 am PDT by Joe Rossignol
Apple's next-generation A16 chip will be exclusive to the iPhone 14 Pro and iPhone 14 Pro Max, according to Taiwanese research firm TrendForce. In a report focused on global smartphone production, TrendForce briefly mentioned that Apple plans to launch four new iPhone 14 models in the second half of 2022, but said that only the Pro models will be equipped with Apple's latest processor....
Read Full Article • 76 comments

Monday September 5, 2022 5:19 pm PDT by Joe Rossignol
Just two days ahead of Apple unveiling the iPhone 14 lineup, The Wall Street Journal's Tim Higgins reports that the lower-end iPhone 14 and iPhone 14 Plus models will be equipped with an "enhanced version" of the A15 Bionic chip. The report does not provide any additional details about the chip, but there has been speculation that the standard iPhone 14 models will be equipped with the...
Read Full Article • 159 comments

Wednesday July 6, 2022 3:12 am PDT by Tim Hardwick
Apple is expected to make its latest A16 processor exclusive to the Pro models in the iPhone 14 lineup, and that diversification strategy is set to become an annual trend in future iPhone series, according to a new report from analyst Ming-Chi Kuo. Earlier this year, Kuo said only the iPhone 14 Pro models will feature an A16 chip, with the standard iPhone 14 and iPhone 14 Max models to...
Read Full Article • 263 comments

Friday October 7, 2022 6:49 am PDT by Joe Rossignol
Apple's new A16 Bionic chip in the iPhone 14 Pro and iPhone 14 Pro Max costs $110 to produce, making it over 2.4× as costly as the A15 chip in iPhone 13 Pro models released last year, according to a Nikkei Asia report. The A16's higher cost is likely due in part to the chip being manufactured based on TSMC's 4nm process, while the A15 is a 5nm chip. iPhone chips could continue to increase in ...
Read Full Article • 186 comments