Apple's next major display upgrade is set to come to three devices initially, according to multiple recent reports. 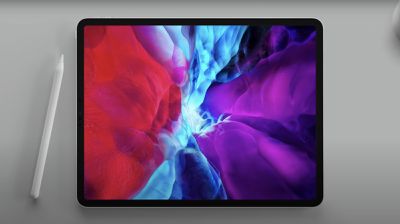 Apple introduced its first true mini-LED display with the 12.9-inch iPad Pro in 2021, having previously experimented with very similar technology in the Pro Display XDR that launched in 2019. In late 2021, Apple launched two more mini-LED devices, the 14- and 16-inch MacBook Pro models. Compared to traditional LCDs, mini-LED backlighting offers benefits like higher brightness, improved contrast, and deeper blacks, but in the long term, it appears that Apple is planning to transition to OLED technology, which can deliver many of the benefits of mini-LED but with even better contrast, wider viewing angles, and no blooming effect.

ETNews claims that LG Display is preparing to supply Apple with OLED display panels destined for upcoming iPad models, with mass production set to begin in 2024. This claim has been echoed by The Elec, which has also said that Samsung is investing in production capability for OLED iPads in 2024. Another report says that China's BOE Technology is preparing to supply Apple with OLED displays for future MacBook models, in addition to upcoming iPads.

BOE and Samsung are believed to be testing two-stack tandem OLED technology, which can offer increased brightness and longevity. This makes two-stack tandem OLED displays more suitable for devices like iPads and MacBooks, since they are often used for a longer period of time than smartphones. LG is similarly developing technology to prioritize improved brightness, longevity, and durability for OLED devices with bigger screens.

Overall, a plethora of reports suggest that Apple is planning to launch two ‌iPad Pro‌ models in 11- and 12-inch sizes, both with Gen 6 OLED display panels, in 2024, followed by the company's first OLED MacBook in 2025. The Elec has explained that LG is planning to use its Gen 6 OLED production lines for 11-inch and 12.9-inch ‌‌iPad‌‌ models, which will debut at some time earlier than the first OLED MacBook. Since the launch of the OLED MacBooks around 2025 will come after Apple's first two OLED iPads, LG is planning to use larger substrates such as Gen 8.5 since more panels can be cut out per substrate in less time.

Renowned Apple analyst Ming-Chi Kuo has suggested that the launch of Apple's first MacBook with an OLED display is dependent on the successful launch of 11-inch and 12.9-inch OLED ‌‌iPad‌‌ models in 2024.

Even further in the future, the next step after OLED for Apple's display technology is likely to be foldables, with both foldable iPad and MacBook models rumored to be in the works.

Thursday June 30, 2022 4:18 am PDT by Hartley Charlton
Apple suppliers are already working on display panels for second-generation OLED iPad models, The Elec reports. Samsung Display is said to be in the process of negotiating prices for new Gen 8.5 OLED deposition equipment designed to make OLED display panels for devices like tablets. Samsung is reportedly planning to use the equipment to mass-produce Gen 8.5 OLED panels in late 2024 for the...
Read Full Article • 44 comments

Tuesday October 11, 2022 3:59 am PDT by Tim Hardwick
Apple could adopt a "hybrid" OLED technology in iPads by 2024 that could allow for slimmer devices while lowering production costs, according to a new report out today (via DigiTimes). By combining rigid OLED glass substrates with flexible OLED thin-film encapsulation, the hybrid OLED technology is said to make OLED panels thinner than rigid OLED panels. The process also reportedly incurs...
Read Full Article • 47 comments

Samsung Aiming to Supply OLED Displays for Both iPads and MacBooks

Friday June 3, 2022 8:45 am PDT by Joe Rossignol
Samsung is planning to build a new production line in South Korea to make larger OLED displays suitable for tablets and notebooks, with the company ultimately aiming to fulfill orders for future Apple products, according to The Elec. The Elec previously reported that Apple plans to release its first iPad Pro models with OLED displays in 2024 and said that Samsung would produce displays for...
Read Full Article • 74 comments

Wednesday August 31, 2022 7:08 pm PDT by Eric Slivka
Apple's rumored plans to transition to OLED technology for future iPad models could involve using "hybrid" OLED technology that combines both rigid and flexible OLED panel materials, according to The Elec (original Korean-language version). The report claims that Apple is reluctant to rely solely on the flexible OLED technology it uses in its iPhone models, as the panels have a tendency to...
Read Full Article • 32 comments

Thursday June 16, 2022 8:06 am PDT by Joe Rossignol
It appears "increasingly likely" that Apple will launch a new 13-inch MacBook with an OLED display in 2024, according to display industry analyst Ross Young. In a tweet shared with his Super Followers today, Young said the notebook is expected to be a new MacBook Air, but he said there is a possibility it will have other branding. Young, who has accurately revealed a range of display-related ...
Read Full Article • 110 comments