When Microsoft was in discussions with Apple about bringing its xCloud platform to the iPhone, Microsoft attempted to sweet talk Apple into allowing the cloud gaming service. 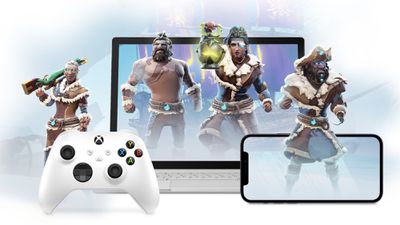 According to emails between Microsoft and Apple executives that were unearthed by The Verge, Microsoft was willing to agree to many of Apple's demands about how the system would work, even agreeing to bring Xbox titles to Apple's platform.

Microsoft told Apple that it would bring triple-A Xbox exclusive games to the ‌iPhone‌, with the games running on the Xbox Cloud Gaming platform. Had this deal been reached, ‌iPhone‌ users might have been able to play high-end Xbox titles on their mobile devices.

Apple wanted Microsoft to submit every game to the App Store individually to be overseen by ‌App Store‌ reviewers rather than offering games in an overarching Cloud Gaming app. Microsoft initially expressed reservations about doing so because of the workload it would create and the negative customer experience, but in March 2020, Microsoft agreed that it could actually submit each app on an individual basis while offering a catalog app linking out to them.

Despite the near agreement, negotiations between Microsoft and Apple ultimately fell through and Xbox Cloud Gaming did not launch as separate apps in the ‌App Store‌, but as a web-based platform that does not need to follow the ‌App Store‌ rules.

Microsoft told The Verge that Microsoft wanted a single streaming tech app to support its individual game apps, but Apple wanted each game to include a full streaming stack.

"Our proposal for bringing games through individual apps was designed to comply with App Store policies. It was denied by Apple based on our request that there be a single streaming tech app to support the individual game apps, as the initial email states. Forcing each game to include our streaming tech stack proved to be unrealistic from a support and engineering perspective and would create an incredibly negative experience for customers," reads a statement from Xbox Cloud Gaming CVP Kareem Choudhry to The Verge.

Emails also suggest that the deal fell through because Apple was concerned about how in-app purchases in Microsoft's games would work. "Their proposal for IAPs is still that they process all IAPs on their existing system and settle up with us (either in real-time or monthly)," wrote ‌App Store‌ games manager Mark Grimm in an email describing the negotiations with Microsoft.

Apple told The Verge that the deal did indeed fall apart over in-app purchase requirements.

"Unfortunately, Microsoft proposed a version of xCloud that was not compliant with our App Store Review Guidelines, specifically the requirement to use in-app purchase to unlock additional features or functionality within an app," reads a statement via Apple spokesperson Adam Dema.

Xbox Cloud Gaming CVP Kareem Choudhry told The Verge that in-app purchases weren't the issue, but Apple rejected many of Microsoft's suggestions on how to implement Xbox Cloud Gaming. "Apple rejected our proposals and we were left without the ability to release a cohesive Xbox Game Pass offering through the ‌App Store‌," he said.

Apple has successfully prevented cloud-based gaming services from Microsoft and Google from launching on the ‌App Store‌ because of its requirements that each app be submitted individually. For Google Stadia, Google too has opted for a web-based system that does not require it to comply with the ‌App Store‌ rules.

contacos
Thats so dumb. Imagine Netflix having to send in every movie or tv show for review before offering it
Score: 39 Votes (Like | Disagree)

DevNull0
So, we could have had AAA gaming on Apple devices. Instead we get siri only Music.

What visionary leadership, Timmy is truly worth his $1 billion with this kind of innovation and personal integrety. Most CEO's would have gone for the games and shamefully made a huge pile of money while making a decent chunk of their customer base happy. Good thing we have Timmy to stop that nonsense.
Score: 35 Votes (Like | Disagree)

Mac Fly (film)
Apple can't compete on a level playing field when it comes to gaming. Simple as.
Score: 26 Votes (Like | Disagree)

thevelvetdevil
Apple: "Why play violent games like Halo when we provide wholesome family experiences like checkers or backgammon, where you can battle your friends and compete for high scores in Game CenterTM"
Score: 22 Votes (Like | Disagree)

TheYayAreaLiving ?
Then what happened? They couldn’t see/face how Apple is dominating the gaming market, ?
Score: 17 Votes (Like | Disagree)

scheinderrob
we need to start jailing Apple execs for their anticompetitive behavior
Score: 16 Votes (Like | Disagree)
Read All Comments