A large number of websites and posts on social media are stoking rumors that Apple has purchased $2.5 billion worth of bitcoin in the company's first move into cryptocurrency, but is there any validity to the claims? 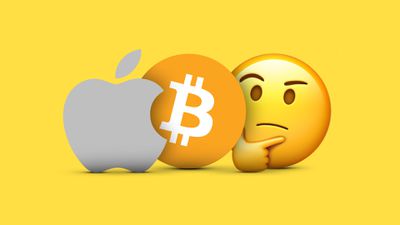 Many people are citing the fact that Apple was looking for a Business Development Manager with experience in alternative payments, including cryptocurrency, earlier this year as proof that it is very interested in Bitcoin.

Apple stated that one of the key qualifications for the fairly senior role was at least five years of experience "working in or with alternative payment providers, such as digital wallets, BNPL, Fast Payments, cryptocurrency and etc."

While experience in cryptocurrency is not mandatory if the applicant had a background in other payment services such as "Buy Now, Pay Later," Apple's interest in decentralized digital currencies may reveal that it is one potential alternative payment method being seriously considered by the company. It may also simply be an indication that Apple is attempting to hire professionals with experience in emerging industries to ensure that it is in a position to compete with rivals if it needs to do so.

In 2019, Apple Pay vice president Jennifer Bailey said that Apple is "watching cryptocurrency," and explained "We think it's interesting. We think it has interesting long-term potential."

With little other evidence that Apple has any serious interest in cryptocurrency, let alone a specific coin, it is reasonably safe to say that the company has not officially purchased a large quantity of bitcoin. There is also significant reason to question why Apple would invest in bitcoin when there are many other available cryptocurrencies that are more sustainable and could suit specific purposes for the company.

Wednesday January 19, 2022 4:09 pm PST by Juli Clover
Illinois is the latest state to attempt to pass legislation that would prevent developers from being required to use Apple's in-app purchase options by allowing for alternate payment solutions within apps. As outlined by Illinois news site WGEM, under the Freedom to Describe Directly Act, distribution platforms like the App Store and Google Play would not be able to force Illinois developers ...
Read Full Article • 302 comments

Monday December 6, 2021 4:37 am PST by Hartley Charlton
Apple is undertaking legal action in Russia to prevent developers from promoting alternative payment methods for in-app purchases that bypass the company's payment system, RT reports. Apple's lawsuit attempts to challenge Russia's Federal Antimonopoly Service (FAS) and the request it made to the company in August to "stop abuse in the market." The FAS's request would allow developers to...
Read Full Article • 71 comments

Friday December 24, 2021 9:10 am PST by Joe Rossignol
Apple must let dating apps like Tinder and Match offer payment methods other than Apple's in-app purchase system in the App Store in the Netherlands, or else it will face fines, the Dutch competition regulator announced today. Specifically, the Authority for Consumers and Markets (ACM) said Apple will have to pay a penalty of five million euros per week, up to a maximum of 50 million euros,...
Read Full Article • 371 comments