Apple is working on even bigger iPad models that could further "blur the lines" between tablet and laptop, according to reliable Bloomberg journalist Mark Gurman. 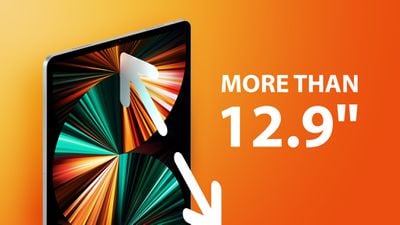 In the first edition of his new "Power On" newsletter for Bloomberg, Gurman said Apple is currently exploring iPads with larger displays for the future. An excerpt from the newsletter:

The biggest iPads that have been available in recent years have been the 11-inch and 12.9-inch iPad Pro. This means that currently, the largest iPads are still smaller than the smallest MacBooks, the MacBook Air and entry-level MacBook Pro, which feature 13.3-inch displays. Because the 12.9-inch ‌iPad Pro‌ is already in a similar range to the 13.3-inch MacBooks, it is not inconceivable that Apple could be testing iPad display sizes around 16-inches, which is the size of Apple's largest MacBook Pro.

Larger ‌iPad‌ display sizes may help to "blur the lines" between the ‌iPad‌ and the Mac in the future, but there would likely also need to be software improvements to properly take advantage of the larger display.

Apple last updated the ‌iPad Pro‌ in April with its custom-designed M1 chip, Thunderbolt support, 5G connectivity on cellular models, a mini-LED display on the 12.9-inch model, up to 2TB of storage, up to 16GB of RAM, and more. Despite these considerable hardware improvements, some users have complained that iPadOS does not take full advantage of the hardware the ‌iPad Pro‌ has to offer, making it more challenging to replace a Mac than it could be.

Gurman opined that Apple ultimately needs to allow Mac apps and a Mac-like multitasking experience with more flexible arrangements of app windows on the ‌iPad Pro‌. By the time even larger iPads would come to market, it is likely that further iterations of iPadOS may improve the experience to take better advantage of the ‌iPad‌'s hardware.

Gurman explained that larger iPads are unlikely to launch in 2022, and are instead likely to come sometime later. In a previous Bloomberg report, Gurman and Debby Wu said Apple is testing a new ‌iPad Pro‌ with a glass back that would support wireless charging for release in 2022.