Apple may be planning to add Thunderbolt to the iPad Pro, making data transfer speeds up to four times faster on Apple's most powerful tablet. 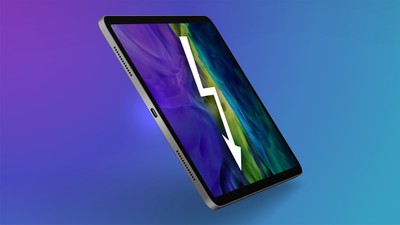 According to a report from reliable Bloomberg journalist Mark Gurman, Apple has tested ‌iPad Pro‌ models with a Thunderbolt port to make them compatible with additional external monitors, hard drives, and peripherals.

Apple is planning to refresh its ‌iPad Pro‌ lineup in the immediate future, introducing new models that "look similar to the current iPad Pros" in the same 11 and 12.9-inch screen sizes, according to Gurman. The two new ‌iPad‌ Pros are expected to feature an updated A14X processor that is "on par" with the M1 chip in the MacBook Air, MacBook Pro, and Mac mini, along with camera improvements.

A mini-LED display will be included with "at least" the larger 12.9-inch ‌iPad Pro‌, with the display upgrade bringing improved brightness and contrast ratios. This is in line with many previous rumors, which have also indicated that the upgraded display technology will be limited to the 12.9-inch ‌iPad Pro‌.

The new ‌iPad Pro‌ models are expected to arrive on April 20 at Apple's "Spring Loaded" event, potentially alongside new AirPods and the long-awaited AirTags item trackers.

Tuesday March 23, 2021 8:33 am PDT by Joe Rossignol
Apple is widely expected to announce new iPad Pro models as early as April, and ahead of time, accessory maker ESR has added a variety of 2021 iPad Pro cases and folios to its online store that offer some potential design clues. While the cases suggest that the next-generation iPad Pro will not have any significant design changes, ESR informed MacRumors that there will be fewer speaker holes ...
Read Full Article • 37 comments