Apple will offer a new matte black color option with the upcoming iPhone 13 lineup, according to leaker Max Weinbach. 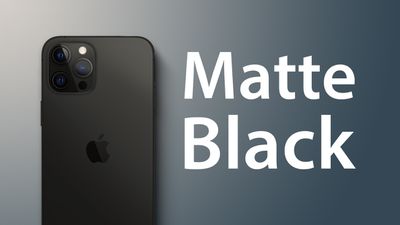 The color is said to be a "redesigned graphite" but is in reality a "borderline black" color. Apple is also apparently experimenting with an orange, bronze-like color for the new iPhones, but Weinbach says this color is unlikely to reach launch.

‌iPhone 13‌ in Matte Black Render From EverythingApplePro
Apple has released a matte black iPhone before with the ‌iPhone‌ 7 and ‌iPhone‌ 7 Plus in 2016, alongside a glossy "Jet Black."

Since then, the only truly monochrome colors Apple has offered is Space Gray on the ‌iPhone‌ 8, X, XS, and 11 Pro, Graphite on the iPhone 12 Pro, or a glossy Black on the ‌iPhone‌ XR, iPhone 11, and ‌iPhone 12‌, but none of these have had the unique look that matte black can achieve.

The ‌iPhone‌ 7 in "Black"
This may be partly because the ‌iPhone‌ 7 was the last ‌iPhone‌ without a glass back, which was needed from then onwards to facilitate wireless charging. Prototypes of an ‌iPhone‌ X, which has a glass back, in a glossy "Jet Black" have been discovered, but there have been no rumors of Apple reviving the fan-favorite color and matte finish until now.

Weinbach also claimed that the ‌iPhone 13‌ will feature an always-on 120Hz display, a fingerprint-resistant coating, improved sound quality during calls, a flatter rear camera module, improved battery life, and an improved Portrait Mode that makes better use of the LiDAR scanner.

Thursday September 9, 2021 7:13 am PDT by Hartley Charlton
The iPhone 13 lineup will offer new Pink, Black, and Bronze colors and storage options will remain the same as the iPhone 12, other than there being no 256GB storage option for the 5.4-inch and 6.1-inch standard models, according to the Ukrainian e-commerce website "KTC," spotted by 91mobiles, that purports to have revealed the upcoming devices' configuration options. MacRumors' render of ...
Read Full Article • 301 comments