A few days before they start arriving at customers, Apple has provided select media outlets and reviewers with models of the new iPhone 13 mini and ‌iPhone‌ 13, giving us a closer look at this year's new ‌iPhone‌ update.

Compared to their predecessors, the ‌iPhone‌ 13 and ‌iPhone‌ 13 mini feature a smaller notch, improved cameras, longer battery life, and better performance. Here's a brief summary of some of the reviews for this year's new handset. 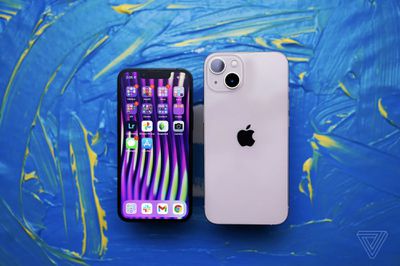 Thanks to the efficiency of the new A15 Bionic chip and physically larger batteries, the ‌iPhone‌ 13 and ‌iPhone‌ 13 mini featured improved battery life. The Verge's Dieter Bohn says that battery life this year is "excellent," pointing to his real-world tests.

On one day of my testing, the regular iPhone 13 made it from 7am to midnight before it tuckered out. That was with some camera testing, watching some video, the usual doomscrolling, emails, work, and some games. It was an intense set of work for the five hours of screentime that day, so that's impressive. On another day with lighter usage, I didn't see the battery warning until the following morning. But the iPhone 13's battery isn't magic. When we had a day of a lot more 4K video testing, I was looking for a charger by 7 or 8.

On the smaller ‌iPhone‌ 13 mini, Engadget says that while it is improved, it is "still shorter than the average smartphone." Generally speaking, CNET says that so far performance and battery life have been solid and that the ‌iPhone‌ 13 will be a reliable option for the majority of people.

In terms of the iPhone 13 and 13 Mini, it's been a good start but we have more in-depth testing to do with the batteries, durability and comparing its cameras against other phones. But right now, the iPhone 13 will be the reliable phone that most people will be more than happy to use for the next few years.

Both the ‌iPhone‌ 13 and ‌iPhone‌ 13 mini feature the same camera setup, meaning performance on both devices will be the same. Both models feature a larger camera sensor allowing more light to pass through into photos, improving low-light performance. The Wall Street Journal's Joanna Stern says that while the improvements are welcomed, they alone are not sufficient enough to convince an iPhone 12 user to upgrade.

Photo via Engadget
"Details are sharp and accurate, colors are rich without being oversaturated, focusing is fast and reliable, portrait mode is good enough to use day to day, and low light and night sight are both exceptional," says The Verge's Dieter Bohn.

Across the entire lineup of ‌iPhone‌ 13 models, Apple is introducing Cinematic Mode, or portrait mode for videos, and we'll have more to share on that in our upcoming hands-on videos. Results in early reviews are mixed, however, with The Verge noting that it's "nowhere near as good as Apple’s own commercials would have you believe" and particularly struggles in low-light situations.

Compared to the ‌iPhone 12‌ and iPhone 12 mini, the ‌iPhone‌ 13 and ‌iPhone‌ 13 mini feature very similar designs. Both handsets are thicker and slightly heavier to accommodate larger batteries, and they both have slightly larger camera bumps on the back. The Verge's Dieter Bohn writes, however, that the design is "still beautiful and modern," and the changes are unlikely to be noticeable in day-to-day use.

NIKKG
If you already have a 12, your just buying the same phone twice.
Score: 30 Votes (Like | Disagree)

If you already have a 12, your just buying the same phone twice.

Mainsail
So, is the iPhone 13 kind of like an iPhone 12s? I always liked the ”S” versions. They seemed solid and reliable.
Score: 17 Votes (Like | Disagree)

darmorenoo
Definetly not worth the upgrade if you have the iPhone 12 or even the 11. The september event was so disappointing.
Score: 16 Votes (Like | Disagree)
Read All Comments