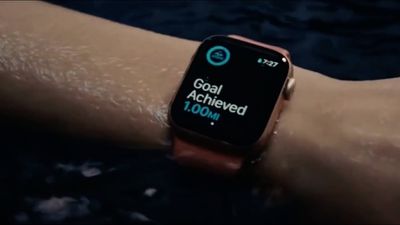 Gurman's report states that Apple is "working on new swim tracking features for the Apple Watch," although he did not offer any additional information about what this could entail.

The Apple Watch is currently able to track a number of water-based workouts, such as surfing, water polo, water sports, water fitness, pool swimming, and open water swimming. It is possible that Apple may be looking introduce additional water-based workout types, or perhaps gather new or more accurate metrics during these existing workouts.

If the upcoming features pertain to major new fitness-tracking capabilities, it is possible that they could come via updated hardware or sensors within the device, but at this early stage there are no tangible indications about what form the swim tracking features will take.

Gurman also said that Apple is working on an "Explorer Edition" variant of the Apple Watch featuring a rugged, impact-resistant casing, designed to appeal to athletes or users who are often in extreme conditions, which may be released as soon as this year.

A combination of the potential Explorer Edition and new swim tracking features may make the Apple Watch Series 7 a much more attractive option for regular swimmers.

The Apple Watch Series 7 is expected to launch later in 2021, but there have been few rumors so far about what the new model may feature other than a possible blood glucose monitoring function. While there have been reports of micro-LED displays and solid-state buttons with haptic feedback for the Apple Watch, these features are not expected to arrive this year.