Apple is looking to significantly reduce the appearance of fingerprints and smudges on the upcoming iPhone 13, according to leaker Max Weinbach. 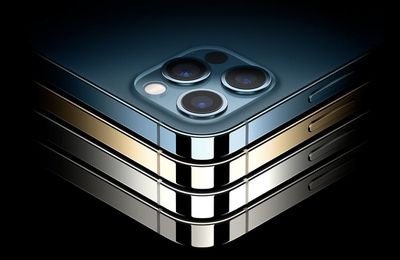 A YouTube video from EverythingApplePro that shared Weinbach's leaks said that the iPhone 13 Pro models will feature a new anti-smudge and anti-fingerprint coating, a move that appears to address complaints that the iPhone 12 Pro's flat stainless steel frame attracts too many unsightly fingerprints.

The ‌iPhone 12‌ Pro and 12 Pro Max in Gold feature a fingerprint-resistant coating on the stainless steel frame. While Silver, Graphite, and Pacific Blue ‌iPhone 12‌ Pro finishes still use a physical vapor deposition (PVD) process for edge coating, the Gold finish uses a special high-power, impulse magnetron sputtering (HiPIMS) process that lays down the coating in a super-dense pattern.

This allows the surface to be tough and bright, with a molecular structure that mimics the stainless steel underneath, making it more durable than "standard" PVD. One added benefit is that it is easier to wipe clean and attracts fewer fingerprints compared to the other models.

Given that Apple has already used an anti-fingerprint coating in this way for the Gold ‌iPhone 12‌ Pro, it seems likely that this process could be extended to all of the ‌iPhone 13 Pro‌ models, meeting Weinbach's speculation. It could also make the ‌iPhone 12‌ Pro models more durable and at least slightly less susceptible to scratches, nicks, and other wear and tear.

Weinbach previously stated that the 2021 iPhones will include stronger MagSafe magnets, astrophotography capabilities, and the ability to take Portrait Mode videos, but it is important to note that Weinbach does not have a proven track record for iPhone leaks.

Friday March 26, 2021 3:52 am PDT by Sami Fathi
Despite being months away from launch, we've already seen several rumors regarding the 2021 iPhone. Now, as we inch closer to release nonetheless, new rumors point towards some design changes, new colors, and new features to expect. Image Credit: EverythingApplePro According to leaker Max Weinbach (via YouTube channel EverythingApplePro), the iPhone 13 will come with a matte black option...
Read Full Article • 160 comments

Calls Will Sound Better Than Ever With iPhone 13

Friday April 2, 2021 3:06 am PDT by Hartley Charlton
Apple is looking to significantly improve the sound quality of phone calls on the upcoming iPhone 13, according to leaker Max Weinbach. A YouTube video from EverythingApplePro that shared Weinbach's leaks said that the iPhone 13 will feature improved noise cancellation for phone calls that will better single out voices while blocking background noise. As part of this system to improve...
Read Full Article