The notch has been a mainstay of the iPhone throughout four generations of the device, and the iPhone 13 will be no different, with the notch continuing to remain on the front of Apple's upcoming smartphones. In spite of this, Apple is believed to have one significant design change in store for the notch this year. 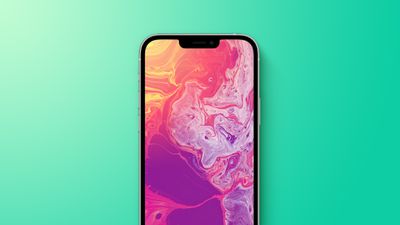 As early as October of last year, proven leaker "Ice Universe" said that while the width of the notch will remain the same on the ‌iPhone 13‌, it will be reduced in height to make it less noticeable.

According to a report from Japanese site Mac Otakara, citing sources within the Chinese supply chain, the ‌iPhone 13‌'s TrueDepth camera array "is getting narrower" because the receiver at the top of the display will move to the edge of the case, suggesting that the notch will be narrower. DigiTimes similarly claimed last month that the ‌iPhone 13‌ will feature a redesigned Face ID system that will allow for a smaller notch at the top of the screen.

Reliable Apple analyst Ming-Chi Kuo has now thrown his weight behind the rumor, saying that the ‌iPhone 13‌ will indeed have a smaller notch.

While it is not entirely clear whether the notch will be getting slimmer, narrower, or perhaps both, a reduction in the size of the notch could make the front of ‌iPhone 13‌ models look different from their predecessors.

Rumors initially suggested that the iPhone 12 lineup would see the first reduction of the notch since its introduction on the ‌iPhone‌ X in 2017, but it now seems that the design change was pushed back into 2021.

The notch has been a point of contention for some ‌iPhone‌ users, who have expressed frustration with the design decision. So while it appears that the notch is here to stay for another year, a reduction of its size on the ‌‌iPhone 13‌‌ may go some way to appeasing notch-critics. The alteration would also offer another reason to upgrade in 2021, as the ‌‌iPhone‌‌'s design is otherwise not expected to change significantly.

Looking further ahead into the future, 2022's "iPhone 14" is expected to finally ditch the notch, replacing it with an Android-style hole-punch camera.

Thursday April 1, 2021 10:58 am PDT by Juli Clover
The next-generation iPhone SE that's set to launch in 2022 will feature the same 4.7-inch display as the current version, according to display analyst Ross Young. The existing iPhone SE is modeled after the iPhone 8 with a 4.7-inch display. There were rumors suggesting that Apple was working on an "iPhone SE Plus" that could come out this year, but earlier this month, Apple analyst Ming-Chi...
Read Full Article • 176 comments

Sunday January 23, 2022 2:59 am PST by Tim Hardwick
Apple has always emphasized the depth of thought that goes into the design of its products. In the foreword to Designed by Apple in California, a photo book released by the company in 2016, Jony Ive explains how the company strives "to define objects that appear effortless" and "so simple, coherent and inevitable that there could be no rational alternative." But every once in a while even...
Read Full Article • 297 comments

Sunday January 23, 2022 10:32 am PST by Juli Clover
Apple is working on a number of new products that are set to launch this fall, and Bloomberg's Mark Gurman says that it will be "the widest array" of new devices that Apple has introduced in its history. In his latest "Power On" newsletter, Gurman explains that Apple is working on four new iPhones (iPhone 14, iPhone 14 Max, iPhone 14 Pro, and iPhone 14 Max), an updated low-end MacBook Pro, a ...
Read Full Article • 150 comments