This year's iPhone 13 lineup will include an always-on display with a 120Hz refresh rate, improved camera capabilities for astrophotography, stronger MagSafe magnets, and a finer matte finish on the back, according to leaker Max Weinbach (via YouTube channel EverythingApplePro). 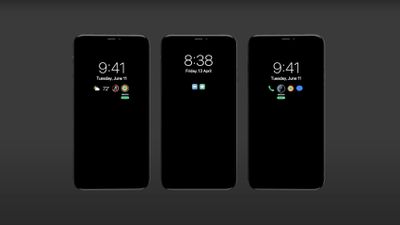 Image credit: EverythingApplePro
Weinbach is a well-known leaker who has shared information via the YouTube channel in the past regarding the 2020 iPhone 12 lineup, some of which came true. Regardless, take the following with a grain of salt. According to his sources, Apple is planning to include an always-on display in the ‌iPhone 13‌ series, with the technology being similar to the always-on display in the Apple Watch Series 5 and later.

Always-on displays are typical in most flagship Android smartphones, and the technology allows users to see information on their screen at all times without having to power on or unlock the device. Ever since the iPhone X, which was the first iPhone to feature an OLED display, many have speculated Apple will bring this feature to ‌iPhone‌ users.

OLED displays use less power than LCD displays, since each pixel is individually controlled, unlike LCD panels which use backlights to light up all of the pixels, even to show a small piece of information on the screen. With OLED displays, Apple is able to only light up the pixels needed to show users the time, battery, or some form of indicator for app notifications, without using a significant amount of battery power.

Weinbach claims that the always-on display will look like a "toned down Lock screen," where the clock and battery charge are always visible, and past notifications are shown through "a bar and icons." When users receive a notification, the notification will "pop up normally except that the screen will not entirely light up." Instead, "it will display it just like you're used to right now, except dimmed down and only temporarily," according to the leaker.

The leaker also "confirms" that a 120Hz ProMotion refresh rate is happening on the 2021 Pro ‌iPhone‌ models, a feature that was widely rumored to appear on the ‌iPhone 12‌. An always-on and ProMotion display would not require a change in physical design, and Weinbach reports there will indeed be no change to the actual chassis on the ‌iPhone 13‌ family compared to the ‌iPhone 12‌ lineup. The only potential hardware change will be a matte back with a "grippier, more comfortable" feeling, similar to the finishing on the back of the Google Pixel series.

Internally, ‌MagSafe‌ will be getting "considerably" stronger, according to the leak. The ‌iPhone 12‌ features ‌MagSafe‌ on the back that allows users to magnetically attach different accessories and offers an alternative way to charge the device, but the magnets have been criticized by some for being weak. Apple is looking to alleviate those concerns by adding stronger magnets, according to Weinbach, although the addition is not expected to be the sole reason for a rumored increase in device thickness. As for the cameras, Weinbach reports that Apple is increasing its efforts in astrophotography.

Astrophotography, the photography of astronomy, typically requires complicated camera setups to proficiently capture the nighttime's dark sky. The integration of the ability into the ‌iPhone‌ is expected to be seamless, with the leak claiming the ‌iPhone‌ will automatically switch to the mode when it registers a user pointing to the sky. The mode will allow the phone to detect different artifacts such as the moon and stars and adjusts settings such as exposure accordingly. Corroborating Apple analyst Ming-Chi Kuo, the leak says the ultra-wide camera across the entire lineup will be getting an improved sensor and lens.

The newest information from the leak points toward the ability to take portrait videos on this year's ‌iPhone‌. Users have been able to take portrait photos since the launch of the ‌iPhone‌ 7 Plus, but it has remained entirely limited to still photos. Portrait mode adds a depth feel to your photos, blurring the background and keeping the center subject fully in focus. With videos, the task becomes much harder since the subject is actively moving, making it harder to add a depth effect in real-time.

The new information joins an already long list of features we're expecting for the 2021 ‌iPhone‌. A Bloomberg report suggests that the biggest headlining feature of the lineup will be the reintroduction of Touch ID on the iPhone. According to that report, Apple is testing burying the Touch ID sensor below the display, allowing users to unlock their device if Face ID is deemed unusable, such as when you're wearing a mask. Unlike the ‌iPhone 12‌ which saw delays due to the COVID-19 pandemic, the ‌iPhone 13‌ is expected to launch on time in September.

And still has a better operating system and user experience than the completion. ??

Android has been behind since the first iPhone was released and they’re still nowhere near to being as good as iOS.

No point rushing something when it’s not ready, apple releases features when they’re ready to be released properly. ?
Score: 52 Votes (Like | Disagree)

So go and use the competition.
Score: 36 Votes (Like | Disagree)

Oberhorst
Always on – sure, why not. A lot of people would like it, I guess. For me it would be the first thing to deactivate though. I'd love me a 120 Hz screen on the other hand.
Score: 29 Votes (Like | Disagree)


Under display finger print sensor - 3 years behind the competition
Score: 28 Votes (Like | Disagree)

So go and use the competition.

You remind me of religious people who don't allow you to criticize their God...
Score: 26 Votes (Like | Disagree)

Those features are not essential in my opinion. So if Apple wants to implement it, waiting for them to perfect it is better.

Except for finger print sensor. I hope they make it on the lock button, like on the iPad Air 4, for better physical contact when unlocking the phone quickly without looking at the screen.
Score: 19 Votes (Like | Disagree)
Read All Comments