While the design of the iPhone 13 is largely expected to be the same as the iPhone 12 lineup, one key part of the design could be changed. The notch on Apple's 2021 iPhones, which houses the front-facing TrueDepth camera system, may be noticeably smaller. 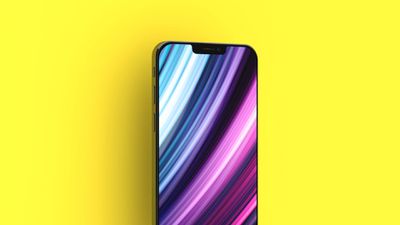 According to a report from Japanese site Mac Otakara, citing sources within the Chinese supply chain, the ‌iPhone 13‌'s TrueDepth camera array "is getting narrower" because the receiver at the top of the display will move to the edge of the case.

Another rumor from proven leaker "Ice Universe" said that while the width of the notch would remain the same, it will be reduced in height to make it less noticeable. While it is not entirely clear whether the notch will be getting slimmer, narrower, or perhaps both, a reduction in the size of the notch could make the front of ‌iPhone 13‌ models look quite different to its predecessors.

Rumors suggested that the ‌iPhone 12‌ lineup would see the first reduction of the notch since its introduction on the iPhone X, but it now seems that the design change has been pushed back into 2021.

The notch has been a point of contention for some ‌iPhone‌ users, who have expressed frustration with the design decision. So while it appears that the notch is here to stay for another year, a reduction of its size on the ‌‌iPhone 13‌‌ may go some way to appeasing notch-critics. The alteration would also offer another reason to upgrade in 2021, when the ‌‌iPhone‌‌'s design is otherwise not expected to change.

Other ‌‌iPhone 13‌‌ rumors have suggested that the device will feature 120Hz "ProMotion" displays, LiDAR on all models, a faster A15 chip, and potentially a portless model. For more on what to expect from the ‌‌iPhone 13‌‌, check out our dedicated roundup.

What Can We Expect From the iPhone 13's Design? [Updated]

Friday January 21, 2022 6:11 am PST by Hartley Charlton
Following months of bleak news about Peloton's "precarious state," including the revelation that it has halted production of its bikes and treadmills, Apple is being floated as a potential buyer of Peloton's troubled fitness business. Yesterday, CNBC reported that Peloton will temporarily stop production of its connected fitness products due to a "significant reduction" in consumer demand, a ...
Read Full Article • 319 comments