Apple has been rumored to make an iPhone with no external ports for some time, in an effort to make a more singular and cohesive design. With the launch of MagSafe on the iPhone 12 and iPhone 12 Pro, it is now looking more likely than ever that at least some of next year's "iPhone 13" will drop the Lightning Connector and have no ports at all. 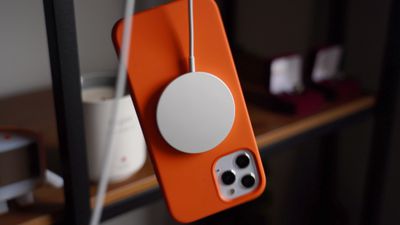 Instead of switching to USB-C, the 2021 iPhone is more likely to drop the port entirely. Reliable Apple analyst Ming-Chi Kuo said in 2019 that Apple would release a high-end iPhone in 2021 that offers a "completely wireless experience" with the removal of the Lightning port.

If Apple is to release only one iPhone 13 model with no ports, it seems likely that it would be the high-end "iPhone 13 Pro Max" model. Kuo suggested that dropping the port would create more differentiation between the high-end models.

Though the development of wireless technologies such as AirDrop, iCloud, and Qi wireless charging have made a wireless iPhone feasible, without doubt the biggest advancement has been MagSafe with the iPhone 12 and iPhone 12 Pro.

Although it was initially rumored earlier this year that the iPhone 13 would drop the Lightning port in favor of an iPad-like Smart Connector, it now seems more likely that MagSafe is the charging solution destined for the portless iPhone.

However, MagSafe does not allow for data transfer. To remove all ports on the iPhone, Apple will have to develop a reliable alternative means of transferring data for Apple CarPlay and diagnostics, so there is still a chance that the Smart Connector may come to the iPhone in some way for this purpose.

Considering that Apple has gone as far as to directly show how ‌MagSafe‌ accessories can permanently imprint its cases, it seems highly likely that the company expects many users to experience the issue. If Apple plans to completely replace the Lightning Connector with MagSafe in the future, iPhone customers may have to get used to this new kind of wear and tear.

Deals: Verizon Offering Up to 30% Off MagSafe Accessory Bundles, iPhone 13 Cases, and More

Monday September 27, 2021 10:53 am PDT by Mitchel Broussard
Today we're tracking a handful of solid accessory discounts offered by Verizon, offering a chance to save on a new case or screen protector for your iPhone 13, MagSafe bundles, and more. Verizon offers free two day shipping across the board on orders over $49, even if you don't use Verizon as a carrier. Note: MacRumors is an affiliate partner with some of these vendors. When you click a link...
Read Full Article • 10 comments

Thursday November 11, 2021 6:20 am PST by Mitchel Broussard
At DailySteals today, you can get Apple's MagSafe Duo Charger for $89.99, down from $129.00 by using the code SBDSMSFE at the checkout screen. This is a brand new model of the MagSafe Duo, and DailySteals offers free shipping to shoppers in the United States. Note: MacRumors is an affiliate partner with DailySteals. When you click a link and make a purchase, we may receive a small payment,...
Read Full Article • 22 comments

Tuesday November 30, 2021 2:54 am PST by Sami Fathi
Some 16-inch MacBook Pro owners appear to have identified a shared issue suggesting the MagSafe 3 connector sometimes fails to deliver the expected charge when their Mac is turned off and the lid is closed. As outlined on Reddit, some 16-inch MacBook Pro Models, when powered off, are failing to charge if the MagSafe connector is plugged in. Instead of turning green, the MagSafe light flashes ...
Read Full Article • 146 comments