Samsung is reportedly developing an item tracker called the "Galaxy Smart Tag" that appears to be positioned as a rival to Apple's long-awaited AirTags product (via SamMobile). 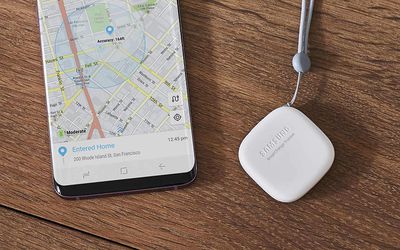 In August, alongside the unveiling of the Samsung Galaxy Note 20, the South Korean company explained how its SmartThings Find feature can locate compatible Galaxy products with greater accuracy. It is now being alleged that Samsung is using this software for a tag-like item tracker.

SamMobile spotted a new device with the name "Galaxy Smart Tag" and the model number EI-T5300 in Indonesian Telecom Certification filings. Based on the name, it is assumed that the product will integrate with Samsung's SmartThings Find feature and offer location tracking.

The parallel to Apple's rumored AirTags is striking. There has been an overwhelming amount of evidence, including extensive patent filings, design leaks, premature placement in Apple support materials, and iOS code, that Apple is preparing to launch an ultra-wideband item tracker. For some time, it has been believed that Apple is on the brink of announcing ‌AirTags‌, but after repeatedly failing to appear leaks are now suggesting a March 2021 launch.

Samsung previously launched an LTE-enabled item tracker with GPS under its SmartThings brand in 2018, but it since appears to have been discontinued.

SamMobile suggests that Samsung could be looking to base its item tracking tag on ultra-wideband technology. ‌AirTags‌ are rumored to be based on the U1 ultra-wideband chip, which Apple is reportedly seeking to make the bedrock of its ecosystem.

If the speculation around Samsung's filing is correct, item tracking appears to be set to become another front of direct competition between Samsung and Apple. After Apple's push into consumer lending with Apple Card, earlier this year Samsung followed with Samsung Pay Card. Yesterday, it was reported that Samsung may be withholding patented periscope camera technology from Apple in order to maintain a competitive advantage with its Galaxy smartphones.

roar08
They'll have defective batteries and you track them using the Wildfires app.
Score: 40 Votes (Like | Disagree)

ouimetnick
At any rate, Samsung’s Tags will be out before Apples. ?
Score: 33 Votes (Like | Disagree)

Whathappened
Of course they are :D
Score: 31 Votes (Like | Disagree)

Moakesy
B..b..b..but how will they design it without having Apple's version to copy from?

Jimmy James
And Galaxy Tags will send your location to the cloud. Which will send it to ad outfits. And government. And app servers. And anyone who will pay for it. You don’t get that range of service from Apple.
Score: 13 Votes (Like | Disagree)
Read All Comments

Monday September 6, 2021 4:02 am PDT by Hartley Charlton
Samsung has implemented another feature that has long been available with the Apple Watch, it has been discovered. Samsung is often criticized by passionate Apple customers for allegedly copying from the Cupertino-based company. In 2015, observers could not help but notice the Samsung Gear S2's arrangement of circular icons, which bore a striking similarity to the Apple Watch's app view....
Read Full Article

Thursday September 29, 2022 7:44 am PDT by Juli Clover
The iPhone 14 Pro and Pro Max introduce some major improvements in camera technology, adding a 48-megapixel lens and low-light improvements across all lenses with the new Photonic Engine. We've spent the last week working on an in-depth comparison that pits the new iPhone 14 Pro Max against the prior-generation iPhone 13 Pro Max to see just how much better the iPhone 14 Pro Max can be. Subscrib ...
Read Full Article • 129 comments

Thursday September 29, 2022 12:38 pm PDT by Juli Clover
Tony Blevins, Apple's vice president of procurement, is set to depart the company after he made a crude comment about his profession in a recent TikTok video, reports Bloomberg. Blevins was in a video by TikTok creator Daniel Mac, who was doing a series on the jobs of people he spotted with expensive cars. After seeing Blevins in an expensive Mercedes-Benz SLR McLaren, Mac asked Blevins what ...
Read Full Article • 666 comments