Prosser: AirPods Studio to Start at $350 But Won't Feature at Next Week's Apple Event, AirTags Delayed Until March 2021 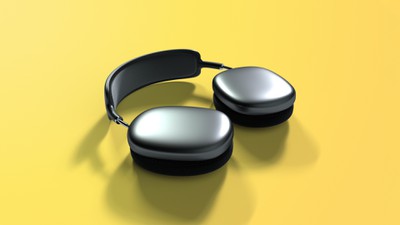 According to Prosser, three separate sources of his have now confirmed that "‌AirPods‌ Studio will NOT be in the event." That prediction falls in line with Prosser's claim earlier this week the headphones won't reach mass production until October 20.

Prosser thinks ‌AirPods‌ Studio could instead be announced via press release at the end of the month. It's also worth noting that as of late September Apple stopped selling third-party audio accessories like speakers and headphones, suggesting a new HomePod "Mini" or ‌AirPods‌ Studio launch is imminent.

In addition, Prosser claims the image renders floating about are of the "luxury variant" and will retail for $599, while another "sport-like variant" will be made of cheaper materials for $350, which is notably the same pricing as the current Beats Studio in the Beats lineup.

In another tweet this morning, Prosser says he is being told that Apple has "pushed back the announcement and launch of Apple's AirTags to March 2021." "‌AirTags‌" are said to be the name of Apple's Tile-like Bluetooth tracking devices, designed to be attached to items like keys and wallets. These item trackers will let you keep an eye on your possessions right in the Find My app.

For what it's worth, Prosser believes Chinese leaker Kang's information regarding the iPhone 12 and rumored HomePod Mini is accurate, and Prosser may have amended his own claims about ‌AirTags‌ and ‌AirPods‌ Studio in light of their absence from Kang's hefty pre-Apple event leak dump.

sterumbelow
As soon as you mentioned Prosser I stopped reading.
Score: 22 Votes (Like | Disagree)

DoctorTech
IF TRUE, Air Tags are turning into AirPower. However, I doubt Apple would push back the announcement of Air Tags after apparently featuring the Air Tag in the artwork for the event.
Score: 16 Votes (Like | Disagree)

This guy, honestly! He's just jumping on board the same train!
March, what a load of nonsense. He plucked that date out of thin air.

As soon as you mentioned Prosser I stopped reading.

The notion that Prosser is some overwhelmingly inaccurate leaker is such nonsense. You guys are ridiculous.
Score: 13 Votes (Like | Disagree)

GadgetBen
This guy, honestly! He's just jumping on board the same train!

March, what a load of nonsense. He plucked that date out of thin air.
Score: 10 Votes (Like | Disagree)
Read All Comments

Sunday May 9, 2021 2:00 am PDT by Sami Fathi
Zoom, a hallmark platform used by millions during the global health crisis, has been given access to a special iPadOS API that allows the app to use the iPad camera while the app is in use in Split View multitasking mode. This case of special treatment was first brought to attention by app developer Jeremy Provost, who, in a blog post, explains that Zoom uses a special API that allows the...
Read Full Article • 304 comments