Apple has been believed to be working on a Tile-like Bluetooth tracking device that is designed to be attached to items like keys and wallets for tracking purposes, letting users locate them directly in the Find My app. 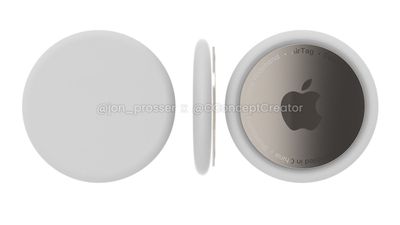 Prosser's 3D renders have apparently been closely based on videos and images of "actual AirTags." He claims to have not posted the original videos to protect his supply-chain sources.

There is no logo on the front of the device, and all product information is etched into a polished silver metal disc on the rear. The final product is reportedly "just a tad larger than a bottle cap." The design is not far from the design envisioned by many concept artists.

The device has no mounting system built-in. Prosser says that a "keychain that has a little leather pouch on it that you can just slip your AirTag into" will be sold separately. Bloomberg's Mark Gurman has similarly said in the past that ‌AirTags‌ will be available with a small leather case.

Prosser went on to say that the ultra-wideband U1 chip will facilitate much of the AirTag's functionality, and it will be coming to "most if not all of their products in the future," with the plan seemingly being to make the U1 chip "part of their entire ecosystem." The U1 chip premiered in iPhone 11 models last year, but beyond improved AirDrop, much of its utility has yet to be realized.

Prosser stated that it is "likely" that ‌AirTags‌ will be unveiled alongside the HomePod mini tomorrow. Both products are "technically ready," and "in terms of production schedule, they are done, and could possibly be announced." Previous leaks have suggested that ‌AirTags‌ are already in full production, so an announcement tomorrow does not seem to be out of the question. Prosser said he did not have information about retail pricing.

He also reinforced claims that the iPhone 12 and AirPods Studio will not appear at Apple's event tomorrow, with the focus instead residing on the Apple Watch Series 6, iPad Air 4, and iPad 8.

It is worth noting that Prosser inaccurately claimed that new Apple Watch and ‌iPad‌ models would be announced via press release on Tuesday of last week, but on other occasions, he has shared accurate information about Apple's product release plans.

Prosser said he plans to make similar renders to show off the design of AirPods Studio in the immediate future.

Baymowe335
Prosser should just make every possible prediction to cover all scenarios so he can say he was right.

Wait, he already does that.
Score: 25 Votes (Like | Disagree)

sirozha
All of these rumors are fake. Apple Car is coming tomorrow.
Score: 18 Votes (Like | Disagree)

Harrycooke
I hope that the small cases aren’t only leather and that they have the silicone option available. Too many accessories that come only in leather. I want a cruelty-free option!
Score: 15 Votes (Like | Disagree)

“Mixed-record” is one way to describe Prosser.

Thank god MacRumors watched his video so I don’t have to.
Score: 13 Votes (Like | Disagree)

Get ready to get disappointed tomorrow. No iPhones tomorrow :(

Nobody is expecting iPhones tomorrow even Apple said October so no surprise
Score: 10 Votes (Like | Disagree)

That would be the worst "One More Thing" ever.
Score: 9 Votes (Like | Disagree)
Read All Comments

Tuesday May 25, 2021 9:24 am PDT by Juli Clover
ElevationLab today announced the upcoming launch of the TagVault: Pet, an AirTag holder that is designed to attach to pet harnesses and collars. The design is similar to ElevationLab's TagVault, offering a full enclosure for the AirTag that's both protective and waterproof. The AirTag holder screws on with four screws and then attaches to a collar with a mounting plate. The TagVault: Pet...
Read Full Article • 74 comments

Tuesday May 25, 2021 1:27 am PDT by Tim Hardwick
WaterField Designs has launched a new Leather AirTag Keychain and an AirTag Luggage Tag for Apple's popular item tracker. The AirTag Luggage Tag consists of two layers of bonded rugged leather that form a pocket in which the AirTag is secured. The Tag attaches with a strong 1.5 mm stainless steel wire that threads through a metal grommet, while perforated holes in a diamond pattern allow...
Read Full Article • 25 comments

It's Possible to Drill a Hole Through an AirTag

Friday April 30, 2021 7:53 am PDT by Joe Rossignol
Unlike a Tile or some other item trackers, Apple's new AirTag does not have any holes or openings for attaching it directly to a keychain, forcing customers to purchase accessories like a leather key ring for this purpose. Interestingly, though, MacRumors forum member smythey has proven that it is possible to drill a hole into the AirTag without breaking it, allowing for a string or a thin...
Read Full Article • 241 comments