Apple is advancing its plans to significantly enhance the iPhone's optical zoom range using periscope lens technology, according to ETNews. 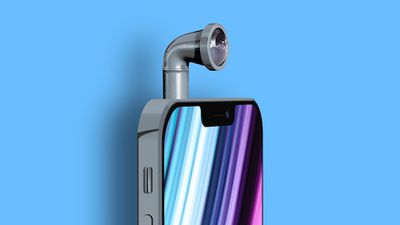 Citing industry sources familiar with the development of ‌iPhone‌ cameras, ETNews says Apple is currently seeking an appropriate "folded" periscope camera solution for the ‌iPhone‌ and has already initiated discussions with suppliers. Apple has filed patents related to periscope lens systems since 2014.

Apple has reportedly encountered issues developing its own periscope camera system due to much of the technology involved being guarded by other patents, leading the company to explore purchasing it directly from patent-holders instead. Specifically, "ball-type actuator" technology is purported to be essential to most periscope camera designs, but Samsung Electronics now owns this technology.

Many multi-camera and periscope camera patents were held by Israel-based company Corephotonics, including the ball-type actuator design, but it was acquired by Samsung in 2019. As a result, Samsung is said now to possess the key patents related to periscope cameras. Samsung's periscope camera technology has allowed it to implement it in devices such as the Galaxy S20 Ultra.

Industry insiders speaking to ETNews have cast doubt over the chances of a partnership between Apple and Samsung Electronics or Samsung Electro-Mechanics in this area. Some believe that Samsung will refuse to supply Apple with periscope cameras in order to maintain a competitive advantage with its range of Galaxy smartphones.

Alongside his correct prediction that the iPhone 12 Pro Max would have sensor-shift stabilization technology, Apple analyst Ming-Chi Kuo said earlier this year that at least one ‌iPhone‌ model will feature a periscope telephoto lens in 2022.

However, Kuo has not attributed this to Samsung, instead predicting that Semco and Sunny Optical will supply the components.

Periscope lenses provide a much higher optical zoom range in a smartphone-sized package. Optical zoom is determined by the distance between a lens and an image sensor, but there is a limit to how much optical zoom range can be increased with the current vertically-stacked camera module structure because it would eventually increase the device's thickness. A periscope lens system allows a longer stack of lenses to be placed horizontally, before reflecting light using a mirror to face in the correct direction, all without increasing the device's thickness.

The camera technology has already made its way into some smartphones. Huawei, for example, ships the P30 Pro with a 5x true optical zoom using a similar mechanism. The ‌iPhone 12 Pro Max‌ currently offers the best optical zoom on an ‌iPhone‌, with the device being able to zoom in 2.5 times.

The image posted with the article is silly and misleading.

Baymowe335
The image posted with the article is silly and misleading.
Score: 41 Votes (Like | Disagree)

JM
Whoever does your graphics needs a raise ?
Score: 35 Votes (Like | Disagree)

PhillyGuy72
I'm going to attach the toy periscope I had when I was 7, 8 years old to my phone. It's probably in a box up in the attic. (Almost looks like this...nice slick Pacific Blue model ?)

orbital~debris
Now that's a truly awful image with which to illustrate the concept. It will just prompt inane comments, or reasons why Apple shouldn't be doing this kind of thing.
Score: 12 Votes (Like | Disagree)
Read All Comments

Tuesday July 13, 2021 7:06 am PDT by Hartley Charlton
Apple has been granted a broad patent for a periscope camera system, which is rumored to be coming to the iPhone for the first time as soon as next year. The patent, spotted by Patently Apple, is simply titled "Folded camera," and was filed with the United States Patent and Trademark Office. Periscope camera systems attempt to address the problem of internal size constraints inside a...
Read Full Article • 105 comments