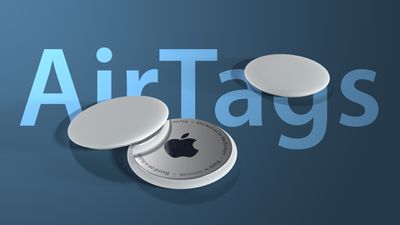 The filings, which include a large number of images, are titled "Mounting Base for a Wirelessly Locatable Tag" and "Fastener with a Constrained Retention Ring," and describe a wirelessly locatable tag that can be used to determine the absolute location of an object in a way that is more accurate than GPS. The patents also reveal a large number of potential AirTags features.

The filings outline "a tag used for tracking physical objects," that is "a small, conveniently shaped device that can be attached to objects," and features "a robust structural design that ensures reliable use through a variety of conditions and environments." They suggest that "the tag may be waterproof or at least splash-proof, and may be capable of withstanding impacts, drop events, or other general trauma resulting from normal use of the tag." It may also be able to provide haptic and audible outputs.

Images in the patent also depicted the potential design of the tag, which happen to closely mirror the rumored design with a metallic disk on the rear and a plastic shell over the top and sides. The speculated leather pouch with a keychain ring also appears to have been illustrated.

The location-tracking and directional capabilities of the tags are said to be extremely accurate, such that "a smartphone may be capable of determining the location of a tag to an accuracy within three feet, and even to within one foot or less." The patents explain how the overall network environment that includes the the tags, smartphones, computers, and other devices provides features, presumably via an ultra-wideband connection.

Beyond locating a misplaced object, the tags may also be used to trigger actions on other devices when they are within a certain proximity or orientation. The patent gives the example of a tag being "positioned in a lobby of a building so that when individuals enter the lobby, their smartphone may detect that it is within a threshold distance of that tag, which in turn causes a map of the building to automatically be displayed on the smartphone."

The patents also explain that the tags may operate in a variety of modes. In a "normal operational mode... the tag may conserve power and establish momentary or intermittent communications with one or more other devices... to confirm the location and may exchange some information about the state or location of the tag. In this way, the tag can essentially periodically update other devices." Interestingly, this communication could apparently function in a one-way system, with the tag recieving no information from other devices despite transmitting it.

"Lost mode" would occur "in response to an unexpected loss of communication between the tag and one or more other devices," allowing the tag to privately route encrypted transmissions through third-party devices to send information to the owner's device. In other words, a lost tag could be silently discovered when another person simply enters its vicinity, allowing the owner to see the tag's location. A different mode could use the same system to report the location and status of tags that have been left at home, for example, via a connection with other devices in the home.

The images also showed tags housed within a compact storage case, an Apple Watch Band, a cord or strap, and a circuit that can close or open. The patent also indicated that the tags could be charged by being mounted on a base, which may be similar to Apple's MagSafe charging cable.

Curiously, images also showed how tags could be positioned on a user's body to monitor posture, track full-body motion to control a game or avatar, or monitor body movements in a workout.

The tags may also be usable for augmented reality and AR gaming. For example, tags could be used as pieces for a game of AR chess since their location can be determineed with high accuracy. They could then be visually replaced in an augmented reality environment with computer-generated graphics.

While the patents do not prove that ‌AirTags‌ will have all of these features when they are announced, the length and breadth of the filings is striking. At minimum, they reinforce Apple's commitment to ultra-wideband technology. Nonetheless, the close correlation of these filings with various ‌AirTags‌ rumors is likely more than a coincidence.

For more information about ‌AirTags‌, see our full roundup.

symphony
I am going to surgically insert these into my wife and kids behind their necks. Definitely with my cat too.
Score: 14 Votes (Like | Disagree)

For example, tags could be used as pieces for a game of AR chess

Be still my beating heart.
Score: 9 Votes (Like | Disagree)

I'm a crap golfer, so I would live these embedded in my gold balls. Spend way less time tracking them down.

SkippyThorson
These are going to be wildly interesting. Going from a tracker to motion-dots... The potential coupled with Lidar is going to be very, very fascinating for augmented reality.

Plus that side perk of finding my damn keys here and there.
Score: 8 Votes (Like | Disagree)

WiseAJ
Shut up and take my money already Apple
Score: 7 Votes (Like | Disagree)

WiseAJ
How long before Tile issues a new statement about how Apple is being unfair and harming them with an unreleased and unannounced product that copies them?
Score: 6 Votes (Like | Disagree)
Read All Comments