This week saw some big developments on both the hardware and software fronts, led by a significant update to the 27-inch iMac (but no redesign yet, unfortunately) and the launch of public beta testing for macOS Big Sur.

Subscribe to the MacRumors YouTube channel for more videos.
Other significant news this week included controversy over Apple's decision not to allow Microsoft's xCloud streaming game service on iOS, another beta of iOS 14, and Phil Schiller stepping down as Apple's marketing chief as he begins to transition out his responsibilities there.

Check out our video above and read on below for more on these stories and more from the past week!

Apple this week announced a significant update for the 27-inch iMac, bringing updated Intel processors and AMD graphics, up to 128 GB of RAM, a better 1080p FaceTime camera, improved speakers and mics, a True Tone display, Apple's T2 chip, and a new $500 nano-texture matte display option. The update did not, however, include a much-anticipated redesign. 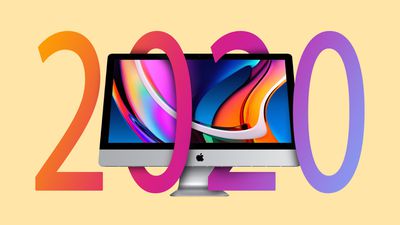 Initial media reviews indicate some impressive upgrades, particularly with the improved webcam, speakers, and mics in this time of working from home, while benchmarks show some nice improvements over the previous generation.

The 21.5-inch iMac saw only a minor change, with a 256 GB SSD becoming the default storage option in place of the previous 1 TB traditional hard drive. The smaller iMac is otherwise unchanged. The iMac Pro also saw a small bump with the base processor now being a 10-core Xeon W chip that was previously an $800 upgrade.

After initially announcing at WWDC that a public beta of macOS 11 Big Sur would be available in July, Apple this week released the first public beta a few days into August, opening it up to wider testing ahead of an official release in the fall.

If you're interested in testing out macOS Big Sur, see our how-to for a walkthrough on the installation process, but be aware that Apple recommends users install it on a backup machine as there are still bugs and incompatible apps that could cause issues and nobody wants to deal with that on their main machines.

Microsoft's "Project xCloud" streaming game service that pairs with its Xbox Game Pass won't be available on iPhone and iPad when it launches this September, and Apple's App Store restrictions are to blame.

Xbox Game Pass and its accompanying xCloud streaming feature offer access to hundreds of games that can be streamed to mobile devices, and Apple says that because it can't review each game available through Game Pass, it can't be allowed on the ‌App Store‌.

Apple this week released new developer and public beta versions of iOS 14, and the company continues to make tweaks as we head toward a public release in the next couple of months. We summed up a bunch of changes in the latest betas, including a new Apple TV widget, support for Exposure Notification apps, and more.

In other iOS 14 news, we took a look at the enhancements coming to Safari including the new webpage translation feature, and a few early third-party widgets.

Apple's longtime marketing chief Phil Schiller is looking to slow down a bit as he turns 60, with the company this week announcing that he will be stepping down as senior vice president of marketing and becoming an Apple Fellow.

Greg Joswiak will be taking on Schiller's role atop the marketing division, although Schiller will remain onboard to oversee the App Store and Apple events such as WWDC.

Samsung this week held a virtual Galaxy Unpacked event where it unveiled its next-generation smartphones that will compete with Apple's 2020 iPhone lineup, as well as a new Galaxy Z Fold2 5G that improves significantly on Samsung's previous folding phone efforts.

New Galaxy Buds Live earbuds, a Galaxy Tab S7, and a Galaxy Watch 3 round out the new products as a full suite of competitors to Apple's major mobile products.

iGobbleoff
That round watch looks so much better. Shame it’s Android
Score: 4 Votes (Like | Disagree)

You could build a PC yes, but it would be a large tower case, and without a 5k P3 monitor. Not a compact all in one parcel. You could build an M-ITX machine and stick it to the back of a monitor if you want I suppose.

Also the GPU is a pro series, 16gb of vram. For those who need it, there isn’t many options shy of an older Radeon VII in that area.

Tradeoffs. The target market isn’t PC gamers here, that should be obvious.
Score: 3 Votes (Like | Disagree)

jlocker
I went for it and took the Bir Sir public beta 1 and I can say that I am impressed for being a beta 1. Feels pretty smooth on my 2019 MacBook Pro 16 with 32gb of ram. In some aspects it feels faster than Catalina. Keep up the good work Apple!
Score: 1 Votes (Like | Disagree)

That round watch looks so much better. Shame it’s Android

I don’t have a preference either way for round or square watches, but it always confused me how much the Apple Watch interface looks like it was designed for a round face.
Score: 1 Votes (Like | Disagree)
Read All Comments