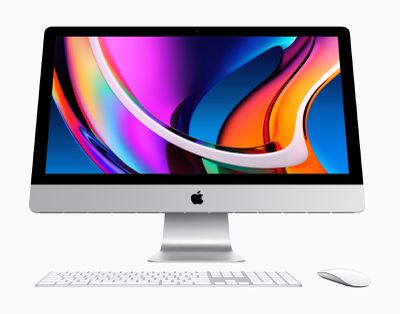 A breakdown of the new 27-inch iMac's features and specs:

Starting at $1,799, the new 27-inch iMac is available to order today on Apple.com and in the Apple Store app. It will begin arriving to customers and will be in select Apple Store locations and Apple Authorized Resellers starting this week.

The new 27-inch iMac features the same design used since the 2012 model, with a redesigned, Apple Silicon-based iMac expected later this year.

Apple today also made a minor update to the iMac Pro, equipping the base configuration with the 10-core 3.0 GHz Xeon W chip that was previously an upgrade option. In addition, the smaller 21.5-inch iMac now comes standard with SSDs across the line for the first time. Customers can still choose to configure their 21.5-inch iMac with a Fusion Drive.

MacFather
Bezels from the 2009 Era

Thank goodness - means I can buy this one without my wife realising I've upgraded.

Rogifan
Why would Apple redesign an Intel iMac when they‘re moving to their own chips. Seems logical they’d save the redesign/wow factor for new Macs with Apple Silicon.
Score: 63 Votes (Like | Disagree)

zorinlynx
This might actually be the machine to buy if you want one of the last Intel Macs that can natively run x86 code. I'm going to be seriously mulling over this.
Score: 62 Votes (Like | Disagree)

Does it really matter if the bezels are 1 inch or 10 inches? It’s a desktop computer, it’s not like you’re gonna bring it with you in a backpack. On the contrary, large bezels in the iMac allows for more airflow. Because of this the iMac is almost always silent, in contrast to the new MBPs which can’t even drive an external screen without the fans going crazy.
Score: 57 Votes (Like | Disagree)